Don’t get me wrong, it’s never boring around here. But we have some new projects coming up that I think you’ll agree are worth jumping up and down a bit.

First, our Fiction River Kickstarter project not only funded, it did so at a whopping 234 percent of our goal. For those of you who were part of making this happen, let me say, Thank You!

That funding means we’re in wonderful fiscal shape already going into the first few issues. And that’s not only good business news, it’s also great news for the readers. We’re not ready to release any more details about the anthologies just yet, but I can tell you from our planning sessions that it’ll be well worth the wait.

Speaking of well worth the wait, we’re already amping up for Kristine Kathryn Rusch’s latest Retrieval Artist novel, Blowback, which will be released in December. Talk about a Merry Christmas. With its multigenre blend of futuristic moonscapes, hard-boiled detectives and a thriller of a plotline, it’s a must-read as a standalone novel or as the ninth installment of the series.

We’ve also reissued the other eight Retrieval Artist books in ebook form and will be reissuing them in trade paper over the coming weeks. 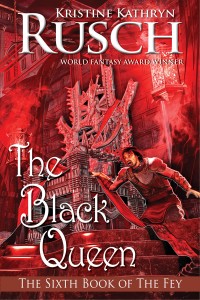 Once the Retrieval Artist books are reissues, we’ll move on to the Fey series, Rusch’s popular Fantasy Epics. The entire series—seven novels and a novella—will be reissued in trade paper, starting with the Fey prequel, Destiny.

And, hold onto your hats, we’ve released The Black Queen in ebook for the first time, and will release The Black King in ebook form in the coming weeks. I know this is great news for Fey fans, and we’re rather excited about it ourselves.

But for now, I’d better sign off. We’ve got some book publishing to do.