Although I love Halloween, I’m really not a big fan of scary things.

To me, Halloween is about the costumes and candy and hayrides and bobbing for apples—all the fun things I used to do as a small child growing up on a New Jersey farm.

But I’ve never gotten on board with haunted houses, hayrides, mazes, stories—well, anything, as I said before, scary. Maybe it was growing up next to a cemetery. Or maybe I just don’t have the constitution for it.

That goes for the horror genre, as well. Ever since I saw Friday the 13th as a kid, I’ve been terrified of basements (and tongues coming out of phones). Ever since a classmate described a scene from Stephen King’s It to me my freshman year in high school, I get creeped out by clowns and storm grates. My exposure to those things happened a long time ago, but the fear is as fresh now as it was then.

So, I’ve spend much of my lifetime purposely avoiding anything that even hints at horror. Which is why I was so surprised the other day to realize that not only do I read and watch horror, I actually enjoy it.

How did that happen?

Well, part of it is the evolution of the horror genre.

Until the horror heyday of the 1980s, horror was less genre than a means through which a writer could evoke emotion. Think Mary Shelley’s Frankenstein, Bram Stoker’s Dracula, Edgar Allen Poe’s short fiction.

But in the ‘80s the concept of horror became pigeonholed into the Hollywood version of Stephen King’s imagination, launched by the success of the movie Carrie: blood and gore and urban legends come to life.

By the mid ‘90s, the popularity of that version of horror waned, and horror fiction became a label few wanted. Heck, even King’s writing stopped being labeled horror, for the most part. 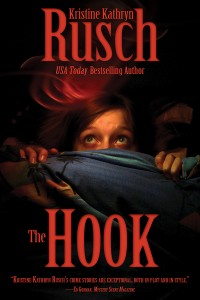 And through this anonymity, horror writing—as an evocative instrument—was able to be reborn. And people like me, children of the horror heyday of the ‘80s, find themselves surprised to be enjoying horror today—TV shows like Grimm and Haven (the latter ironically based on a King novella) and horror-of-the-human-condition fiction like Kristine Kathryn Rusch’s latest short story offering, The Hook (inspired by the urban legend).

Don’t get me wrong, I’m still not going to any haunted houses this Halloween. But I won’t let my horror bias get in the way of quality writing anymore. I hope you, too, will take advantage of everything the new age of horror has to offer.