All I want for Christmas… 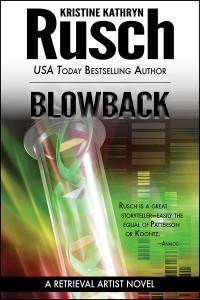 It might not be Christmas quite yet, but here at WMG, Santa has come to town early—andit’s all because Retrieval Artist Miles Flint is on his “nice” list.
Blowback, the ninth novel in Kristine Kathryn Rusch’s Retrieval Artist series, debuts this Tuesday in ebook and print format, and it has already received wide acclaim.
RT Book Reviews says: “Rusch offers up a well-told mystery with interesting characters and a complex, riveting storyline that includes a healthy dose of suspense, all building toward an ending that may not be what it appears.”

GenreGoRoundReviews.com says: “The latest Retrieval Artist science fiction thriller is an engaging investigative whodunit starring popular Miles Flint on a comeback mission. The suspenseful storyline is fast-paced and filled with twists as the hero comes out of retirement to confront his worst nightmare.”

Astroguyz.com says: “The book takes a fascinating turn into an alien underworld as Retrieval Artist extraordinaire Miles Flint returns along with his daughter Talia to uncover a plot that may dwarf the initial Anniversary Day attacks. This is juxtaposed against interplanetary politics and efforts by the Moon’s Chief Security officer Noelle DeRicci to hold an uneasy United Domes government coalition together. We always like our intergalactic politics as truly alien, and Rusch delivers the goods. It’s one thing to depict members of a Federation whining about treaties, quite another to depict motivations that are truly, well, alien.” And also: “We have to admit that we’re a newcomer to the series, but may have to dig in to the earlier books. Blowback does stand on its own as a great read!”

Want to learn more? You can even read an excerpt of the book on Rusch’s website, www.kristinekathrynrusch.com.

So, treat yourself or give them as gifts, because as New York Times bestseller Orson Scott Card says in his review of Blowback: “You will want to go back and read every other installment in the series, because this is among the best fiction of any kind being written today.”

And that’s no Christmas miracle.