If there’s one thing you learn as a journalist (or you’d better learn, anyway), it’s that deadlines are fixed. The word “dead” didn’t get in there by accident. As in, “cross this line, and you’re dead.”

Deadlines don’t move for anything, and they don’t take a holiday. Or a day off.

In fact, in the newspaper biz, vacation says are not-so-jokingly referred to as “job-deferment days.”

My reporters understood this mentality, if they didn’t always embrace it. Miss a deadline too many times, and you found yourself looking for another place to procrastinate. Occasionally, I’d find myself looming over a reporter’s desk threatening to pull the story out of their hands (or more apropos, off the server) finished or not. I don’t miss my deadlines.

Ask anyone I’ve ever worked with—hell, ask my teachers, all the way back to grade school—and they’ll affirm that statement. Part of my rigid adherence to deadlines is my rule-following nature (thanks, Dad!), but even more so it’s my desire not to thoughtlessly inconvenience someone else. Because deadlines are like dominoes. Bump one, and they all start falling around you. The only way to stop the fall is to remove some dominoes. In the publishing industry, that means removing projects, aka books.

And removing books is not an option.

So, instead, the rest of the people on the project, the people who cannot do their work until you meet your deadline, suffer. You see, that last deadline, publication, doesn’t move. Heck, I once got a newspaper out—on time—on two computers powered by a generator during a three-day power outage when there was an eighty-foot pine tree on my house and we had to drive the files three hours to the press because the landlines were severed by the same storm. The storm hit on deadline. As I’ve said, missing deadline is not an option.

Publication is your promise to the reader. I take promises very seriously. Weekends, holidays, sick days, vacation days…none of them affect deadlines. A smart manager builds that time into the deadlines in the first place. I tend to be pretty smart. But some things are outside my complete control.

Writers and editors, I’ve found, are the same be they nonfiction or fiction. Deadlines, to them, are sometimes more of a movable target. I replaced an editor once who had failed to meet deadline for 52 straight issues because she kept rewriting the stories on the page to “make them better.” Every missed deadline cost the company money in overtime by the production department (who also had to rush to do their jobs), the union-paid press workers and by the delivery folks who had to wait around for the late papers to be delivered. If she had worked for me, she would have missed one, maybe two. After that, the only thing she would have been late for would have been the unemployment line.

Sometimes, editors are late because writers are late. And writers are usually late because they’re either a) procrastinators (which also makes them really good at writing quickly and meeting quick deadlines, ironically), b) perfectionists, or c) both.

Which is why it’s my job to care so much about deadlines. Because as a writer, myself, I get those reasons. Hell, I embody those reasons. But my staff requires me to keep the project moving so they don’t get screwed in the process. Because we’re sure as shootin’ not going to make the reader suffer.

So, I herd cats. Fortunately, I like cats (and writers and editors) very much.

And that’s where the manager in me takes the writer in me and gives her a good shake. (Besides, I believe these days, giving the writer or editor a good shake is called “creating a hostile working environment.”)

So for you, dear reader, I will keep gently herding those cats to keep bringing you the books you want when we say we’ll have them.

And now, I must sign off. After all, I have deadlines to meet. 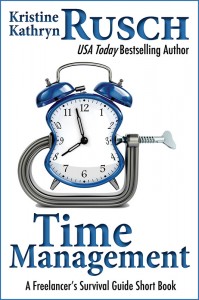 P.S. If you found yourself squirming uncomfortably in your chair and wondering, Do I have a problem meeting deadlines?, we can help. Pick up Kristine Kathryn Rusch’s Time Management in ebook or trade paperback. Just don’t procrastinate reading it <grin>.