We’re pleased to announce the release of The Death of Davy Moss in paperback, with great new cover art. 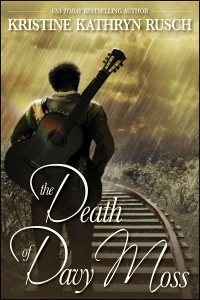 TEEN IDOL DAVY MOSS DIED ALONE ON A MOUNTAIN ROAD. NO ONE EVER FOUND HIS BODY.

Davy Moss died fifteen years ago, but his fans keep him alive. They “see” him everywhere. They hold reunions, listen to his music over and over again. They encourage him to haunt them.

But Davy Moss already haunts one man. Josh Candless, the man Davy Moss became after that accident. Contractor, loner, a man who makes music in the quiet of his apartment. Until one fateful day when he gives an impromptu performance in a bar.

EMILY LUKOVICH HAS SWORN OFF MEN. THEN SHE HEARS JOSH CANDLESS.

Music promoter Emily Lukovich wants to make Josh Candless a star. She has no idea he’s already been one and run away from it. She has no idea who she has taken on, but she’s afraid she knows why.

Because Davy Moss betrayed everyone he ever knew. And Josh Candless might do the same…

“A joy of clarity and lyricism. She is a new breed of writer: a Renaissance woman.”
—Charles de Lint

Available in print or in electronic form from $6.99.
Amazon, B&N, iTunes, Kobo, Smashwords and others.

Also available in paperback from WMG! 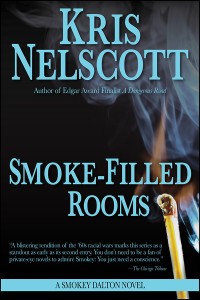 On the run after the assassination of Martin Luther King, Jr., Private Investigator Smokey Dalton and Jimmy, the young boy he rescued, have settled under assumed names in Chicago. But history won’t leave him alone.

His job in security at the Chicago Hilton places him in the center of the protests at the 1968 Democratic Convention. Worse, a killer works his South Side neighborhood, killing children. The Chicago Police Department doesn’t solve crimes in the South Side.

Smokey can’t ignore the crimes, any more than he can ignore the tension building in the city that hot August. He has to take action, before he loses everything.

Chosen as one of the top ten mystery novels of the year by both Deadly Pleasures and Booklist, Smoke-Filled Rooms fulfills the promise of the award-winning Dangerous Road, and makes Smokey Dalton into one of the mystery field’s most memorable detectives.

Available in electronic form for $6.99.
Amazon, B&N, iTunes, Kobo, Smashwords and others.
Preorder the audiobook from Audible.