Judging by the cover

I’ve spent a lot of time the past week thinking about race in America. A few things prompted this. One, we’re getting closer and closer to the release of Kris Nelscott’s long awaited next Smokey Dalton novel, Street Justice. But another is the juxtaposition of the general reaction to the media coverage of behavior by two people in the limelight: Richard Sherman and Justin Bieber.

Let’s start with the latter first.

Truthfully, I could care less about these stories on their faces. A football player trash talking is nothing new. It’s not behavior I support, but it’s not unheard of. And a pop star in trouble with the law, well, um, that’s kind of rote at this point, isn’t it?

But what has made me take notice is the reaction to those stories. Richard Sherman—the Stanford grad whose educational prowess is as keen as his sports prowess—is called a “thug” for his trash talking. Justin Bieber—who faces criminal charges in three cities and two countries at the moment—is called a “misguided youth.”

Look, I don’t agree with any of the behavior that landed these two in the news recently, but let’s at least have an honest conversation about what these incidents mean about who they, and we, are. Richard Sherman says “thug” is the new n-word. And he has a very good point. Vehemently exclaiming that you’re better at something than someone else doesn’t make you a thug. A thug is defined as “a violent criminal.” Sherman was aggressive in his language, yes, but not violent. And he’s certainly not a criminal.

Conversely, Justin Bieber was arrested most recently on suspicion of assault. If anyone’s going to get the thug label here, it would be him.

So, why the seeming swap in descriptions? It’s hard not to think prejudice is involved here.

Every time I think we should be moving past this as a society, I’m reminded of how far we have to come.

I mentioned the Nelscott books before. And I’ll return to them now. Because they, too, were the victim of prejudice.

A decade ago, publishers had a hard time understanding how to sell books about an African-American detective written by a white woman. Kris has talked about this in her blog, and you can read that here, so I won’t belabor the point. Needless to say, they killed the series, never really giving it a fair shot despite its many award nominations, outstanding reviews and reader popularity.

When Kris told me she wanted to bring that series back and give it the treatment it always deserved, I jumped at the chance. 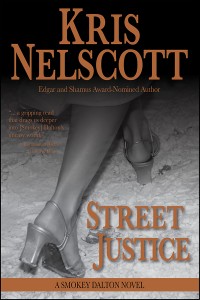 You see, I’ve seen first-hand the impact racism can have even generations later—and my experience was mild by comparison. My family hid their ethnicity after immigrating to this country for fear of violence. As a result, my father never learned the language of his parents’ country of origin even though his grandmother lived with him and spoke only that language. I didn’t fully realize my heritage until I was a teenager. And it wasn’t until even later that I learned how to actually pronounce my last name.

It’s a name I have kept and will never change.

Just like Kris won’t stop writing about Smokey Dalton. And thank goodness. What a shame it would be to keep him from the world.

If you want to read more about Street Justice or preorder the novel, click here.