…Well, not really. But we are thinking a lot about crime this week at WMG. And who could blame us? Between the much-anticipated new release in the Smokey Dalton series, Street Justice, and the first Fiction River Special Edition, Crime, it’s no mystery why we’ve got sleuthing on our minds.

In Street Justice, private detective Smokey Dalton must deal with a family emergency that uncovers a seedy underbelly of criminals preying on young schoolgirls. But in Smokey’s world, justice comes not from the police or the courts, but from the neighborhood itself.

Praise for the first six books in the Smokey Dalton series speak to the groundbreaking narrative Nelscott weaves through a tumultuous part of America’s past. Entertainment Weekly said: “It’s not hard to draw parallels between Nelscott’s PI Smokey Dalton and Walter Mosley’s Easy Rawlins…. But Dalton’s no knock-off.” Publisher’s Weekly said in a starred review that Nelscott “deftly interweaves the issue of race with politics, societal question and personal relationships.” And Salon.com said: “Kris Nelscott can lay claim to the strongest series of detective novels now being written by an American author.”

Every book in this series has been honored as a years’ best, an award finalist, or an award-winner, and often all three—with an Edgar finalist, a Shamus finalist, and a winner of the Herodotus Award for Best U.S. Historical Mystery among them.

I can also announce that a film based on A Dangerous Road is in development with Trisquare Film Producers. So, you might want to get reading if you haven’t yet discovered this series. It’s powerful stuff. 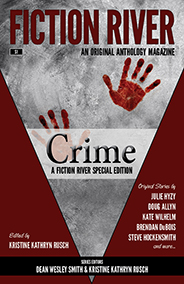 From a twisted tale of greed by masterful writer Kate Wilhelm to a dark tale of murder and betrayal by Shamus-award winner Brendan DuBois, Fiction River Special Edition: Crime covers the entire gamut of the mystery genre—cozy to noir. New York Times bestselling author Julie Hyzy joins Edgar Award-winner Doug Allyn and several others to create one of the strongest (and most diverse) anthologies of the season.

But don’t take my word for it. Ellery Queen Mystery Magazine says, “Fiction River [Special Edition]: Crime edited by Kristine Kathryn Rusch leads off with strong new tales by three familiar EQMM contributors: Doug Allyn with a gangster whodunnit, Steve Hockensmith with a con game story, and Brendan DuBois with a fresh variation on the old brothers-who-took-different-paths ploy. A sampling of other contents, including experimental short-shorts by Melissa Yi and M. Elizabeth Castle and a clever turn on the greedy-relatives-want-inheritance by Kate Wilhelm, suggest high quality throughout.” And Publishers Weekly says, “Among the volume’s better entries are Doug Allyn’s “Hitler’s Dogs,” in which narrator Doc Bannan seeks the truth about his gang mentor’s death, and Steve Hockensmith’s “Wheel of Fortune,” which relates the schemes of a pair of con artists.”

Even if you’re not normally a mystery reader, you might want to check these two books out. It would be a crime not to give them a chance (Sorry, arrest me. I can’t resist a good pun.)