Google Doodles make me happy. Whatever your opinion of the company, their Doodles sometimes make my day. Like the one for the first day of spring: a man watering the ground as the word Google sprouts from it. Sometimes, it’s the little things.

Spring always puts me in the mood to clean house, be that organize something or get in shape or start something new. We do a lot of starting new things around here, and spring’s no exception, but there’s something about spring that gives it that extra je ne sais pas.

This spring, for example, we’re partnering with Kobo on a fantastic promotion to create Kobo Special Editions of two of our upcoming Fiction River anthologies: Past Crime, edited by Kristine Kathryn Rusch, and Pulse Pounders, edited by Kevin J. Anderson. These editions will include bonus stories found only in this special ebook version. We can’t tell you how excited we are to partner with Kobo and Mark Lefebvre on these projects. The preorder for these exciting volumes should be up next week. We’ll update this blog when they’re live. 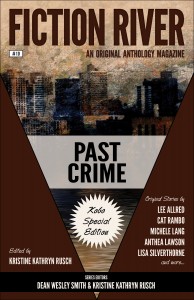 These projects came out of our recent anthology workshop held here at the coast, where six of our Fiction River editors—Dean Wesley Smith, Kristine Kathryn Rusch, Kerrie L. Hughes, John Helfers, Kevin J. Anderson and Rebecca Moesta—chose stories for their upcoming anthologies. We had talented writers from around the world attend and submit work, and we have an amazing lineup of volumes coming. Fiction River launched a year ago April, too, so that kind of innovation must be a spring thing. <g>

To give you a teaser about these special editions, here are the blurbs and covers:

Laws change from culture to culture, decade to decade. Strange laws make criminals of ordinary citizens. Like the Massachusetts woman whose brother asks her for help, slave hunters at his heels. Or the little Irish girl who needs to protect a priest from a different kind of hunter. Or the Native American detective searching New York’s Stonewall Bar for a ratfink on the night of a world-changing riot. These stories and more prove that once again, Fiction River’s crime volumes have, in the words of Ellery Queen Mystery Magazine, “high quality throughout.” 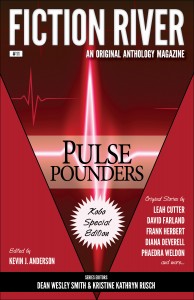 Starts with a bang.

Ends with a bang.

And a lot of bang in between.

Pulse Pounders. Ranging from straight thriller to science fiction, fantasy to pulp adventure, these stories make your heart race. Share the excitement as a woman held hostage in a chair has only a few minutes to escape; a man trapped in a time loop revisits a crisis point in the past; and a mother hunts after a psychotic lover who has stolen her child. Including an original never-before-published Frank Herbert story, these page-turners show why Adventures Fantastic says Fiction River “is one of the best and most exciting publications in the field today.”

These must-read volumes publish in October and December, respectively, so you can preorder yours now and then get busy with your own spring cleaning…or organizing…or planning. Speaking of planning, now’s a great time to subscribe to all of Year Two, which starts in May, so you don’t have to think about it again until next spring and save yourself some money, too. A year is $39.99 for ebook or $99.99 for print (in the U.S.). And both ebook and print subscribers to Year Two will get those special Kobo editions as well as the regular ones.

Because it’s the little things that can make your day.