Murder Most Foul: The Death and Rebirth of an Award-Winning Mystery Series

With the release of Kris Nelscott’s seventh Smokey Dalton novel, Street Justice, and a movie in development, up-and-coming publishing house WMG Publishing helps right a wrong that once killed what Salon called “the strongest series of detective novels now being written by an American author.”

LINCOLN CITY, OR, 3/18/14—Fifty years after Martin Luther King, Jr. spoke of his dream, Americans still mark that moment in history. It propelled the country forward on a path the U.S. continues to pave.

That path has proved rocky at times, both in fact and fiction, as author Kris Nelscott can attest.

You see, Nelscott is white. The protagonist in her groundbreaking series of historical mysteries—in which the acclaimed author brings the racial strife and political unrest of the late ’60s/early ’70s throttling into the present—is African-American.

And this dichotomy lead to the premature death of an award-winning series, which also received Edgar and Shamus Award nominations and was favorably reviewed everywhere from Publishers Weekly to Entertainment Weekly.

Why? Because publishers just a decade ago couldn’t figure out how to sell a book with an African-American detective written by a white woman. Some still can’t.

“I wrote a detective novel,” Nelscott says. “I picked an unusual setting—Memphis in March of 1968, just before Martin Luther King’s assassination. My detective, Smokey Dalton, happened to be black, because I knew he had grown up with Dr. King. Characters come to me first, and I let them dictate.

“But aside from the setting, the novel was classic—almost too classic—detective fiction. My loner detective sitting in his office in a dingy part of town gets a visit from a beautiful blonde. There’s a mysterious will. There are family secrets.

“When I finished, I thought the novel’s biggest problem was its classic framework.

WMG Publishing, however, has no such problems. The four-year-old rapidly growing publishing house has resurrected the series, releasing Street Justice, another gripping, compelling, thought-provoking novel and the author’s seventh book in the series, today. It has also rereleased the rest of the series in ebook and trade paperback. The series is available in audiobook form from Audible.

A film based on the first book in the series, A Dangerous Road, is in development by Trisquare Film Producers.

“It’s time these books be taken on their outstanding merits,” says WMG Publisher Allyson Longueira. “Reviewers, fans, award committees, Hollywood—everyone loved these books. But publishers let misinformation, at best, or bias, at worst, prevent them from finding these books a wider audience. Thankfully, the publishing industry is changing. And fast. Our ability to resurrect this series is proof of that.” 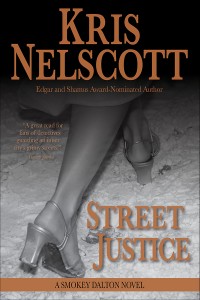 In Street Justice, private detective Smokey Dalton must deal with a family emergency that uncovers a seedy underbelly of criminals preying on young schoolgirls. But in Smokey’s world, justice comes not from the police or the courts, but from the neighborhood itself.

Praise for the first six books in the Smokey Dalton series speak to the groundbreaking narrative Nelscott weaves through a tumultuous part of America’s past. Entertainment Weekly said: “It’s not hard to draw parallels between Nelscott’s PI Smokey Dalton and Walter Mosley’s Easy Rawlins…. But Dalton’s no knock-off.” Publisher’s Weekly said in a starred review that Nelscott “deftly interweaves the issue of race with politics, societal question and personal relationships.” And Salon.com said: “Kris Nelscott can lay claim to the strongest series of detective novels now being written by an American author.”

Every book in this series has been honored as a years’ best, an award finalist, or an award-winner, and often all three—with an Edgar finalist, a Shamus finalist, and a winner of the Herodotus Award for Best U.S. Historical Mystery among them.

For more information about this series, or to schedule an interview with Kris Nelscott, contact WMG Publisher Allyson Longueira at wmgpublishing dot com.