The resilience of youth

You’ve probably heard people talk about how resilient kids are, especially little kids. I’ve always heard that, too. But seeing it in action is a totally different thing.

My four-year-old daughter, you see, broke her arm two weeks ago. And by broke I mean badly. Both bones in two pieces. One cleanly, the other not so much. Fortunately, the bones didn’t pierce the skin. But she needed to be put under to have it set, and she’ll be in a splint (which helps hold the bones in place better than a cast, in this case) for about six weeks.

The bones couldn’t be fully realigned, so it’ll be a year or so before we know for sure if her arm will resume normal alignment and function. Why a year? Because in kids that young, the bones will remodel themselves over time. As in, they’ll reform and realign as she grows. That kind of break in an adult would have earned said adult a VIP ticket to surgery, with pins, plates, you name it. But a four-year-old can in some ways heal herself.

But their resilience comes not only in their physical nature. It applies to their state of mind, as well. Not two hours after Nola had come out of anesthesia, she was joking, laughing and enjoying the unlimited supply of popsicles her ordeal entitled her to. She took Tylenol for two days, then stopped complaining of pain. A week later, trying to get her to slow down was the problem.

I’m not saying she hasn’t been affected by all this. Of course she has. She was worried about going back to preschool (where the accident happened) and having her other arm broken. But that was temporary. She gets annoyed at her cast from time to time, but only when it really hampers her from doing things. She broke her right (dominant) arm, so now she’s learning to use her left. One silver lining is she’ll likely wind up being ambidextrous.

I only wish Mommy was so resilient. I generally take charge and hold it together well during a crisis, but I crash hard afterward. This was no different. From the moment I got the call from the preschool until the moment they took my daughter from my arms to carry her into the operating room, I remained calm and reassuring. But the second she was out of sight, I broke down. Part of that was the shock. Part of it was a response to my daughter pleading with me to come with her into the operating room because she was scared, but I was not allowed to go. The nurses, however, were amazing, and comforted my daughter (and later me) the entire time. But I’ll never forget that moment.

I’m still not fine. But I will be. Once she is fully healed, I’ll be okay. Only then will I stop worrying (well, much). Because as parents, we need to protect our children. So, if something bad happens, we feel responsible because we couldn’t prevent it (or couldn’t be there to prevent it). We lose sleep, we wish we could turn back time, we wish for magic wands.

But kids, they move on. Nothing stops them for long. They define resilience. 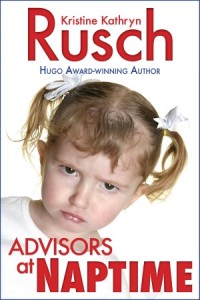 Kristine Kathryn Rusch captures this idea beautifully in her short story “Advisors at Naptime.”  I have to admit, it’s long been one of my favorites. But now, I read it a little differently. It’s available in ebook from your favorite retailer.