It’s not Christmas yet, I swear, but I can understand if you’re confused. After all, Christmas decorations seem to go up earlier and earlier these days. In fact, I saw a great meme the other day (which I can’t find now, so you’ll have to bear with my example from memory) that was basically a letter from Thanksgiving, scratch that—Halloween, telling Christmas to wait its turn. I understand the sentiment. One holiday at a time, please!

But living in the Pacific Northwest, I’ve also learned that when the salmon swim upstream, fighting to go in the right direction is pointless. So, Christmas in October it is.

To embrace this model, I have not one but two new releases to tell you about. Both are from the incomparable Dean Wesley Smith. And both are part of two very different series.

The first is The High Edge, the fifth offering in Dean’s Seeders Universe series. 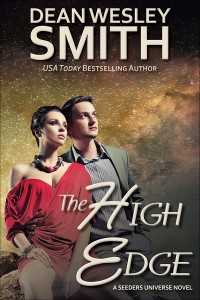 Benny Slade lives in New York City. One moment the city around him (and everyone he knows) seems normal. The next moment, everyone dies.

Working to survive among the dead (and plan for a future) feels impossible, but Benny doesn’t give up easily. Especially when he meets the woman of his dreams, and she offers to help him and others survive.

And then she offers him an even a bigger job, a job that could take him out into the stars.

These are space opera action-adventure with a dystopian romantic twist. Ha, try to shelve that one!

The next book up is what would have been our December release if Christmas didn’t start so darned early these days. It’s called Heaven Painted as a Christmas Gift, and it’s the second novel in Dean’s paranormal urban fantasy Heaven Painted series. Oh, and did I mention Poker Boy shows up, too? 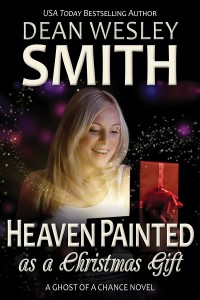 Poker Boy and his team have saved the world countless times. The Ghost of a Chance agency follows a similar charge. Superheroes and ghosts, all working for the greater good.

But as the holidays approach, both groups face a challenge with higher stakes than either can tackle alone.

The Ghost Agents, including newly dead recruits Belle and Nancy, team up with Poker Boy and his team to stop a deadly threat—and save Christmas.

Keith West of Amazing Stories hit the nail on the head when he said, “[The Poker Boy] series is unlike anything else out there. It’s quirky and a lot of fun.”

That sentiment applies to the Heaven Painted series, as well. But you’ll just have to read it to truly see what I mean.

So, whether you find yourself longing for a Christmas-themed novel or searching for something far from it, you’ve got two great options from Dean this month.

Now isn’t that a wonderful life.