Publisher’s Note: Get ready for launch

Tomorrow marks a day I’ve been anticipating for a long time now. Tuesday marks the official launch the next novel in Kristine Kathryn Rusch’s Retrieval Artist Universe Anniversary Day Saga: A Murder of Clones. It also marks the beginning of a one-a-month release schedule for the remainder of the books in that saga (all six of them). Can you say binge reading?

Now, some of our readers might recognize that title. The similarly titled novella that inspired the novel appeared in Fiction River: Moonscapes, edited by Dean Wesley Smith, in February 2014. We also published a special standalone edition of the novella for select supporters from our first Kickstarter project.

But even if you’ve read that novella, you won’t want to miss this novel. 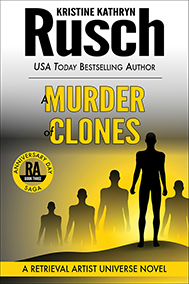 A Murder of Clones picks up the cliffhanger suspense from Blowback, which was released in December 2012. Long-time fans will note the absence of Retrieval Artist Miles Flint in this new novel, as well as the fourth in the Saga (Search & Recovery), but never fear, he will return with a flourish in the fifth book, The Peyti Crisis.

A Murder of Clones instead offers essential backstory on the Anniversary Day bombings, weaving more characters and clues into the rich and dangerous universe of the Retrieval Artist series.

The Anniversary Day bombings on the Moon sent shockwaves throughout the Earth Alliance. No one knows who created the clones responsible and turned them into ruthless killers. No one knows where or when they’ll strike next.

The bombings compel Earth Alliance Frontier Marshall Judita Gomez to launch an unauthorized investigation into a case from her past involving the murder of clones. An investigation that might cost Judita not only her career but the lives of her crew.

A Murder of Clones also marks a tipping point for this series. You see, when Kris wrote Anniversary Day and Blowback, she thought she was writing more standalone thrillers in this popular series. She was wrong. To be honest, I had an inkling she was wrong because I kept trying to pull the word standalone out of our marketing materials. This story felt so much more complex than something that could be contained within a single novel.

But the novels are fantastic on their own, too, and she’s the award-winning bestselling writer, the one with the vision, so I tend to give her the benefit of the doubt on these issues.

So, when she came to me and said her next Retrieval Artist novel was not just a novel but a multi-novel saga, I wasn’t surprised. Overwhelmed at first, mind you; that meant we had several books to publish, and I knew fans would be clamoring for the next one as soon as we released its predecessor. But mostly what I felt was excitement.

Because I know Kris, and I knew she would write this whole saga to its thrilling conclusion without stopping. And I also knew that would allow us to do something really, really special.

You see, the Anniversary Day Saga is the first science fiction series to be completely written before its full release. Once we knew it was a saga, we could publish the books on a schedule that allows fans to read until the very end, without having to wait a year or more between novels to see what happens next. Instead, they only need wait a month.

I believe the Anniversary Day Saga now sets the standard for all other series to come.

We’re also putting the new novels up for preorder as soon as the systems allow, which means as of tomorrow, you can not only buy A Murder of Clones (and, of course, Anniversary Day and Blowback) but you can also preorder Search & Recovery and The Peyti Crisis. And by next week, Vigilantes will also be available for preorder. Starbase Human will be available for preorder in February and the saga conclusion, Masterminds, in March.

And the positive reviews are already coming in. Publisher’s Weekly says, “Fans of Rusch’s Retrieval Artist universe will enjoy the expansion of the Anniversary Day story, with new characters providing more perspectives on its signature events, while newcomers will get a good introduction to the series.”

See why I’m so excited?

And if that’s not enough to give you goosebumps, check out the incredible Anniversary Day Saga trailer that the amazing Jane Kennedy composed.