Publisher’s Note: A Time for Firsts

I’ve been talking a great deal about the Retrieval Artist series lately, especially the Anniversary Day Saga, and for good reason. When you release this many books in this short a timespan, that’s big news in the publishing industry.

And although we’re giving a lot of love to the Saga, we haven’t forgotten about the original books in the series. And we’re showing you, dear readers, some love in return with a great deal. 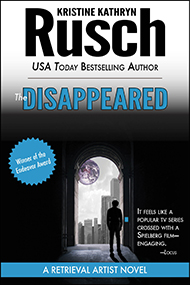 Later this week, the ebook price of The Disappeared, the very first novel in the Retrieval Artist series, the one that explains how the now-infamous Miles Flint became a Retrieval Artist in the first place, will drop to 99 cents for a very limited time. This is the lowest we have ever dropped the price of one of our novels, so if you haven’t read this book before, now’s the time to grab a copy. The price will revert to its regular $5.99 next Wednesday.

Here’s the synopsis for this Endeavor Award-winning novel:

If you haven’t yet been enticed into Retrieval Artist Universe, now’s the time to find out why io9 calls Miles Flint one of “the top ten greatest science fiction detectives of all time and Booklist says: “Rusch has created an entertaining blend of mystery and sf, a solid police drama that asks hard questions about what justice between cultures, and even species, really is.”

A great read and a great deal. What’s better than that?