April showers bring May flowers. But this April also showers us with more compelling fiction from Kristine Kathryn Rusch and the Anniversary Day Saga. 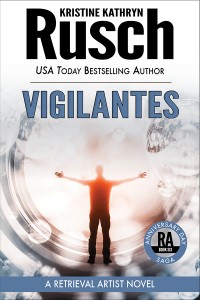 Vigilantes, the sixth book in this eight-book saga, releases Tuesday, April 14, and it features one of Rusch’s classic gut-punches. Someone key to this series will die.

I won’t tell you who, of course. But fans of the Retrieval Artist novels, and Rusch in general, know that no one is ever safe if the story demands his or her death.

A shocking act of violence…

The looming threat of another attack spurs the Moon’s chief security officer, Noelle DeRicci, to uncover the identity of the masterminds behind the Anniversary Day bombings before they strike again. Armed with information uncovered by Retrieval Artist Miles Flint and Detective Bartholomew Nyquist, DeRicci lets herself hope she can put an end to the violence against the Moon.

But then a brutal murder changes everything.

DeRicci must risk everything to launch a secret investigation into the very heart of the Earth Alliance.

Can the next attack be stopped?

Since its inception, the Retrieval Artist series has brilliantly captured those societal fears that keep us glued to our televisions or the newspaper or the radio, and let us play out those fears in a future society filled with actual aliens (not people who only seem alien to us). The Anniversary Day Saga has ramped that exercise to new levels. And once you read Vigilantes, you’ll see just how relevant the correlation between societal discord and the themes explored in the Saga truly are.

I’m being purposely obtuse here—and brief. I don’t want spoilers. You’ll just have to read these books to see if I’m exaggerating when I say that you’re reading iconic literature in the making.