I’ve been thinking a lot about fresh starts lately. Probably because I’m moving to a new house in a new town (although I’ll still have my old job…you can’t get rid of me that easily <g>).

As much as I hate, hate, hate moving, it certainly prompts a period of reevaluation. For example, do I really need that vase-chair-doohickey in the new place? If the answer is yes, it gets packed. If it’s no, it goes either to the give-away or sell pile. I try to avoid thinking about whether I really needed it in the first place. That way lies organizational madness.

But I’m feeling all sorts of inspired about our new home. It’s bigger, first off. And it’s in an area with much better schools for my daughter, who (gulp) starts kindergarten in the fall. And the new neighborhood is filled with professional couples with small children who play can play in the streets under the watchful eyes of several parents.

My old house is nice enough, mind you. It was always too small. We bought it at the tippity top of the housing market (lucky us), so that was all we could afford at the time. And the neighborhood, well, let’s just say it’s not a good sign when you don’t know your neighbor right next door was dead for a month because you never see them anyway. I feel badly about that. She was still in the house that whole time. But that’s a sad, sad story for a different day.

My point is, change brings, well, more change. And I’m embracing it. I’m letting my inner obsessive-compulsive out to organize the house from top to bottom. I have plans, and a label maker. My husband should be very, very afraid.

Other times, you need a completely new start to escape your past. 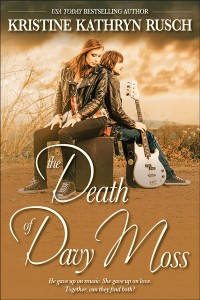 TEEN IDOL DAVY MOSS DIED ALONE ON A MOUNTAIN ROAD. NO ONE EVER FOUND HIS BODY.

Davy Moss died fifteen years ago, but his fans keep him alive. They “see” him everywhere. They hold reunions, listen to his music over and over again. They encourage him to haunt them.

But Davy Moss already haunts one man. Josh Candless, the man Davy Moss became after that accident. Contractor, loner, a man who makes music in the quiet of his apartment. Until one fateful day when he gives an impromptu performance in a bar.

EMILY LUKOVICH HAS SWORN OFF MEN. THEN SHE HEARS JOSH CANDLESS.

Music promoter Emily Lukovich wants to make Josh Candless a star. Unaware of his past, she finds herself drawn to his music, his potential—everything about him.

Because Davy Moss betrayed everyone he ever knew. And Josh Candless might do the same…

The Death of Davy Moss has garnered acclaim from such well regarded publications as The Midwest Book Review, who said: “Complex characters driven by multiple motivations form the hallmark of this serenade, especially recommended for readers who enjoy music as surely as they do romance.” And Fresh Fiction, who said: “I found this to be a lovely read and with its strong protagonists and subtle mystery amid an intriguing backdrop of the music industry I think this story will appeal to almost anyone.”

This is most certainly an enjoyable, appealing book. And like Davy Moss, the book itself has gotten a second chance, too, with a brand-new cover design that more accurately portrays its genre.

So, you have your own new beginning and second chance wrapped into one fantastic book, which is also available at a new lower ebook price. You can also pick up the paperback or audiobook editions, as well.

Now, go get reading. I have more boxes to pack…