As some of you already know, I’m moving to Eugene, Oregon, this month. Yes, I’ll still be working at WMG. But I’m going to be hard to contact for the rest of this month because of the move.

And this is why: The movers recently loaded the rest of my earthly possessions into a truck and transported them to our new home in Eugene. Movers possess a rare magic, I assure you. Sadly, that magic didn’t extend to my car ride. That part was hell. 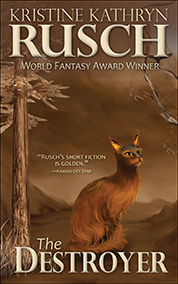 Because I transported five cats to their new home. Yes, five. It’s a long story. Well, it’s actually three long stories. But the point is, have you ever taken a cat on a long drive (keeping in mind that “long” to a cat means anything longer than, say, the driveway)?

Yup, that’s what I did. And that’s why I’m in hell. I mean, two hours of caterwauling? Not to mention whatever noises the cats were making. That was the part of the trip I’d been dreading for months.

I was prepared, of course. I’m always prepared. Or, at least, I try to be. I got pheromone diffusers for the new house, pheromone spray for the cat carriers and a pheromone collar for the cat least likely to tolerate the trip. Okay, I’ll be honest, he needs the collar all the time. He’s pretty high strung.

I know Kristine Kathryn Rusch and Dean Wesley Smith sympathize. They’re cat people, too, as you might realize.

Kris even has enough cat fiction stories to make up at least a couple of collections.

So, let’s make a deal. You read cat fiction. And I’ll try to turn my cat-crazy drive into a distant memory.

Here are some good places to start:
Five Feline Fancies
“Star” (which you can read for free on Kris’ website next week, by the way)
“The Destroyer”
“Strays”
“Familiar Territory”

Some of these are pure mystery. Some mix mystery and fantasy. And one, Destiny (which is included in Five Feline Fancies), is a prequel to an entire series (The Fey).

If you’re not a cat-lover, well, not to worry. She writes about dogs, too. But that’s a topic for another week.