I’ll never forget my first horror movie. I was 11 or so. My sister and I weren’t supposed to watch R-rated movies until we were 17, but we were at a friend’s house and they were watching A Nightmare on Elm Street. I knew I shouldn’t watch it, but, well, you know how it goes when you’re a kid. So, I did. And I’ve regretted it ever since.

Basements still scare me. But at least I don’t ever feel like a tongue is going to come out of my smartphone. 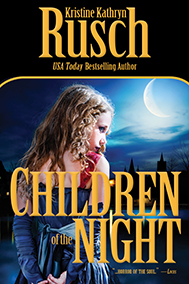 I’ve had a tenuous relationship with horror ever since. My freshman year in high school, someone described a scene from Stephen King’s It to me and I still can’t walk over a storm drain for fear some homicidal clown will grab my leg. I learned to be very careful when it came to watching or reading horror.

But as I’ve gotten older, I learned to appreciate the genre better. I listened to Interview with the Vampire on tape while driving at night. I’ve watched Grimm and Haven (based on a Stephen King story, no less) religiously. And I’ve read every one of Kristine Kathryn Rusch’s horror stories.

Kris presents horror in such a way that it’s hard not to appreciate it even if horror isn’t your thing. As the London Times says, “Like early Ray Bradbury, Rusch has the ability to switch on a universal dark.”

Her latest story, “Children of the Night,” is a perfect embodiment of this statement. 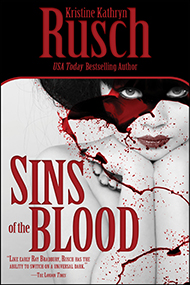 No one told Cammie about the children. She finds out on her sixth eradication. The fear in the little girl’s eyes, the horror at Cammie’s approach, brings on the dreams. She trained hard to become a vampire slayer, but now she questions everything. Her job, her motivations, even her own past.

Those of you who’ve read Kris’ novel Sins of the Blood might recognize Cammie. “Children of the Night” is the short story that inspired that novel.

And just in time for Halloween, “Children of the Night” is available this week on Kris’ website as her Free Fiction offering, starting at noon today.

So, check it out. And if you enjoy it, you might want to pick up Sins of the Blood, which is available in ebook, trade paperback and audiobook.

Have a frightfully good week.