Publisher’s Note: The Strange Side of the Law

The list goes on, but you get the idea. If you want to see them all, click here.

So, why am I telling you all about these weird, still-on-the-books laws? Well, to illustrate that laws that someone thought important enough to pass in the past don’t always make sense to us in the future. And because today marks the release of Fiction River: Hidden in Crime, which is all about historical crimes.

Imagine paying a fine for walking across town. Or hiding an illegal marriage. Or losing your life for playing the harp. Strange crimes, dangerous activities, some from the not-so-distant past, return to life in Hidden in 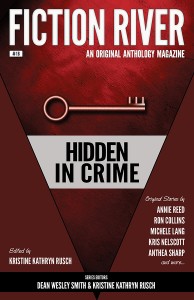 Crime. See why Ellery Queen Mystery Magazine says Fiction River’s crime volumes have “high quality throughout,” and why Publishers Weekly states “… fans of the unconventional will be well satisfied.” Join some of the best authors in the business as they uncover once-hidden crimes.

Table of Contents
“The Color of Guilt” by Annie Reed
“Hiro’s Welcome” by Patrick O’Sullivan
“The American Flag of Sergeant Hale Schofield” by Kelly Washington
“Combat Medic” by Kris Nelscott
“Night of the Healer” by Tonya D. Price
“The Quality of Mercy” by Michele Lang
“Daughter of Joy” by Cindie Geddes
“Democracy” by Mario Milosevic
“Sisters in Suffrage” by Debbie Mumford
“Knocked Up” by Elliotte Rusty Harold
“O Best Beloved” by Angela Penrose
“Sunshine” by Michael Kowal
“The Harper’s Escape” by Anthea Sharp
“As the Berimbau Begins to Play” by Paul Eckheart
“Death of the Turban” by Bill Beatty
“On the Edge of the Nations” by Dan C. Duval
“Window Frame, Handprint, Bloodstain” by M. Elizabeth Castle
“The White Game” by Ron Collins

So, be sure to check out this fantastic volume of Fiction River, edited by the incomparable Kristine Kathryn Rusch. These compelling stories will make you think twice about what’s legal and what’s not and why.