Our next new release is a novel thirty years in the making. I know, I know, our authors usually write much faster than that, but there’s a reason this one took so long.

But instead of explaining it to you myself, I thought this time, I’d let the author’s words speak for themselves.

So, here’s Dean Wesley Smith’s introduction from Smith’s Monthly #21, in which this novel was first published: 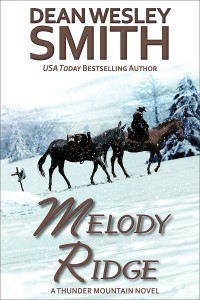 I wrote jukebox short stories, as I called them, for over thirty years. I set the stories in a small bar called the Garden Lounge that was owned by a really nice guy named Radley Stout. Just Stout to all his friends.

The jukebox had a special science fiction power. It could take a listener of a song played on the jukebox back to a memory.

Physically back to the memory.

And that person could then, in the few minutes of the song, change their life.

My first jukebox story was published in Night Cry Magazine, the sister magazine to the Twilight Zone Magazine, in 1987. That was a very long time ago.

And I had written and not published two jukebox stories before that.

Over the years, I wrote more jukebox stories and sold them.

“Jukebox Gifts” was published in the Magazine of Fantasy and Science Fiction and got me award nominations and a movie option. I even published a jukebox story in the Jukebox Collector Magazine, the only piece of fiction the magazine ever published.

As the years went by, I kept wondering about the origin of the jukebox, about those mysterious parts inside it that allowed it to take listeners to a memory. Stout, my character who owned the jukebox, never wanted to open it up and look at the strange equipment.

As the author, I wasn’t ready to look inside yet either.

But I always considered the jukebox stories pure science fiction.

I just hadn’t figured out the science to the jukebox.

Then a couple years ago, for the pages of this magazine, I started a new time travel series with a first book called Thunder Mountain. Again, pure science fiction, and in the Thunder Mountain series I actually explained the time travel with physics and math.

After Melody Ridge in this issue, I now have seven Thunder Mountain novels in the series. They all stand alone, but I think it would be fun for a reader to start with Thunder Mountain and read them from the start all the way through.

So what does Melody Ridge have to do with the jukebox stories?

Finally, after almost thirty years of writing jukebox stories, I wrote the jukebox origin story and that origin is Melody Ridge.

I finally got the courage to open up the jukebox and take a look at what made it work.

To me, this doesn’t feel like an end of anything, but actually, now with the origin known, I can write even more jukebox stories as the mood strikes.

And I hope to keep writing Thunder Mountain short stories and novels as well.

So I hope you enjoy Melody Ridge and the other stories in this issue.

As a writer, I am very proud that I finally figured out a puzzle that had me stymied for almost thirty years.

I’m so pleased with the direction this series is going, and I can’t wait to see what Dean comes up with next. If you’re a fan of either of the Jukebox or Thunder Mountain series, like me, or of time travel tales in general, you will want to pick up this latest of Dean’s clever creations. It’s the perfect holiday gift for a loved one—or yourself.