Publisher’s Note: Go to the Green with this New Thriller

In today’s world of publishing, older books can gain new life. And our latest release is no exception.

A fast-paced thriller originally published under a different name and title, the book was released just as the publishing company was going under. In those days, that meant the book was dead even before it hit the shelves.

But now, we can bring back these lost gems.

And thus, An Easy Shot by Dean Wesley Smith was born (or perhaps I should say reborn). 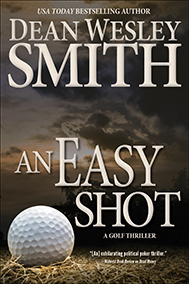 Seattle detectives Craig and Bonnie Frakes want nothing more than to enjoy each other’s company and their golf vacation in Scottsdale. They need the rest.

But their vacation plans take a sudden turn when they overhear a conversation between two men plotting a murder—the murder of someone very powerful.

Outside their jurisdiction and unsure whom to trust, the Frakes must plan each move of their investigation carefully—or risk multiple lives, including their own.

To be accurate, this is actually the book’s third rebirth. The first came when Dean released this novel in serialized form over eight issues of Smith’s Monthly, beginning with issue #18. Then, he used it as the anchor novel in issue #28. Now, it’ll available as a standalone novel in ebook and trade paperback format beginning tomorrow (Tuesday, May 24).