Publisher’s Note: Of Mice and Men and Cats and Dogs 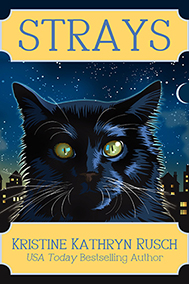 I’ve been thinking a lot about cats and dogs lately. As some of you already know, I have three cats…all boys. Two are litter mates. The third is, um, special. Max is a 20-pound Maine Coon and the biggest scaredy cat I’ve ever kept company with. All three are seniors—over the age of 10, in fact. The older two, the brothers, still act like they’re kittens in many regards. Very active, playful, willing to knock untold items off a nightstand to make a point…

Max, on the other hand, sometimes confuses himself for a dog, I think. The other day, I was sitting on the couch while he reclined on the ottoman. Someone approached the front door, and Max sat up and started growling. Had I not known better, I’d have thought he’d bark next. Now, granted, as soon as it became clear said person intended to stay at said door, he high-tailed it downstairs like his scaredy-cat nature demands. But still. Weird. 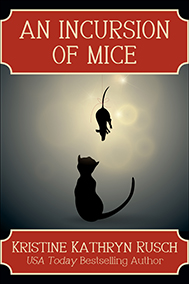 No wonder we find these animals so fascinating. They even inspire their own fiction genres.

Foremost of these, of course, is the cat cozy. We have three of these in our WMG inventory, all by fellow cat-lover Kristine Kathryn Rusch.

In the first days of the Clinton administration, Ransom, a DC private eye specializing in Republican dirty tricks, falls on hard times. He finds himself investigating the murder of a local celebrity—Bob the Weather Cat.

Ransom finds it hard to take himself seriously, but he tries for the sake of a client, a rich little old lady with a grudge against feline-haters. 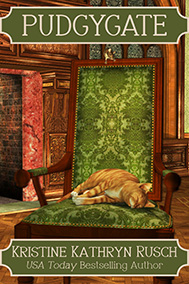 Chosen as one of the best short stories of 1993, “Strays” pits Democrat against Republican, cat-haters against cat-lovers, in a town newly changed by a pivotal election—and the death of a kitty in a yellow rain slicker.

And “An Incursion of Mice:”

Beautiful longhaired tom Wall T runs a tight household. But when the other cats in his pride begin reporting a mouse incursion, he launches an investigation. What he uncovers might change everything he thought he knew about crime and leadership.

Plus, the holiday favorite, “Pudgygate:”

Imagine a dinner party in an English country manor with an American cook named Bubba making a traditional Thanksgiving dinner, waiters from Cal Tech, British royalty among the guests, a cat named Pudgy, and a thief. Honestly, what could go wrong? 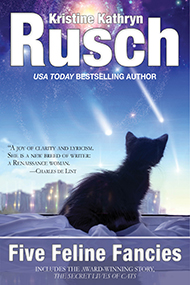 And if that’s not enough, Kris has many more cat stories. For a sampling of these, try the collection Five Feline Fancies.

Five of Kristine Kathryn Rusch’s most popular cat stories. They run the gamut from the award-winning “The Secret Lives of Cats” to the whimsical “The Poop Thief.” Other stories in the collection include reader favorite “What Fluffy Knew,” the short mystery “Scrawny Pete,” and the Fey prequel “Destiny.”

Finally, not to forget our canine friends, check out “The Disappearance of Wicked:” 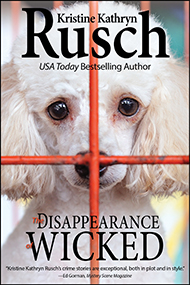 So, go on, get reading. It’s raining figurative cats and dogs around here.