I love watching the Olympics. It’s not for the sports so much, but for the stories that go with them. The athletes themselves, their hopes and dreams, their hard work and determination, their struggles and triumphs. To me, the Olympics highlights some of the best aspects of humanity.

Only a week into these Summer Games, and already we’ve seen some shining examples of what it means to be human, even if that human is, well, extraordinary.

I watched Simone Manual become the first African-American woman to win an individual event in Olympic swimming history. The expression on her face said it all.

I also watched Michael Phelps earn his fourth gold medal in the 200m individual medley and shed tears over his accomplishments. I watched the swimmers hug and congratulate each other, no matter how fierce the competition to win gold might have been only seconds before.

Phelps made history several different ways with that one win.

He joins track and field Olympians Al Oerter and Carl Lewis as the only Americans to win an individual event four times.

And perhaps the most stunning record of all: The win earned him his 13th individual gold medal, besting a record set by Leonidas of Rhodes in 152 BC.

Yes, you read that right. Michael Phelps just broke a record set more than 2,100 years ago.

History in the making. You can read more about that here.

And while Leonidas is said to have had the speed of the Greek gods, one of our WMG authors happens to write a lot about Greek gods (you know I had to come around to books eventually, right?). Kristine Grayson even wrote about an Olympian in her book Completely Smitten. 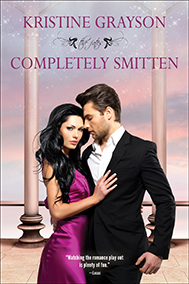 Darius has been a sidekick forever. Always the best friend, never the hero. Known throughout the ages by a variety of names from Merlin to Sancho Panza, Puck to Andvari, Darius has kept his real identity secret.

Three thousand years ago, he disrespected true love. So, as punishment, the Fates took away his good looks and forced him to unite 100 soulmates before he got his looks back.  He just united his 98th and 99th couple. He has one left when he meets Ariel Summers.

Ariel Summers, a world-famous triathlete, hikes through the Idaho Wilderness to come to terms with a career-ending injury. She falls off a cliff, but somehow manages to stop on a ledge halfway down. But she needs help, and a handsome man provides it—using magic. She meets Darius in his true form, which he can revert to once a year—and falls in love with him.

Or does she? Because Darius’s lifelong enemy, Cupid, lurks in the woods, and he’s shot an arrow at Ariel. Did it hit? And does it matter? Because Darius knows Ariel is part of the final couple he must unite. He can’t bear to unite her with anyone else. But Darius doesn’t deserve true love. So he must break Cupid’s spell, find Ariel’s soulmate, and unite them. Even though he doesn’t want to.

So, when the Olympics are over, and you’re going through withdrawal from the amazing real-life stories these athletes inspire, we have some fiction to carry you through.

Now, back to the Games.