I’ve always found assassins to be fascinating characters. I mean, they kill people, so they’re the bad guys, right? Except it’s complicated. And they’re not always bad. Sometimes, they’re even the good guys.

We see this kind of dilemma with other character types. Angels who go bad. Vampires who save people. The list goes on.

But assassins are a special kind of quandary. Because they kill for money. Therefore, they chose this life. It wasn’t forced on them.

So, how does one choose to be an assassin? And why? And what does that say about their moral compass?

And certainly fodder for a great main character. 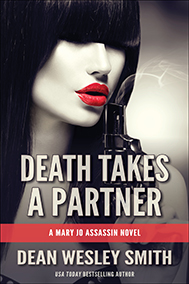 Speaking of which: A couple of blogs ago, I mentioned that Dean Wesley Smith had created a new thriller series, called the Mary Jo Assassin series. Now, the first book in that series, Death Takes a Partner, is set to release tomorrow.

Mary Jo, one of the most beautiful and deadly assassins in all history, loves drinking vodka and orange juice after a job well done.

She planned her next kill perfectly. Every detail thought through.

But Mary Jo never planned on meeting Jean, the beautiful woman two houses down the street.

A twisted story of love, killing, and drinking, not necessarily in that order.

Mary Jo is a fascinating addition my list of favorite assassins. But don’t take my word for it Check it out for yourself. The book will be available in ebook and trade paperback here.