The series tells the story of three middle school friends who found themselves protectors of a magical cookbook. Each season revolves around a mystery that must be magically solved, but the series is as much about friendship, family and growing up as it is magic.

It’s family viewing in my house. Very much an extrovert, Nola is always looking for shows we can all watch together. But I’ll admit, it’s getting harder as she grows older.

Preschool programming has long been pretty solid. Channels like PBS, Disney, Nickelodeon and Sprout offer a wide selection of shows with interesting characters, but more importantly, they are framed around learning. Math, spelling, social skills, morality…the programs serve as education vehicles as much as entertainment.

But once the kids get into school, the options diminish quickly, at least in my opinion. No longer education-based, I often find the shows vapid, annoying and anything but entertaining.

I have to admit being impressed with the Amazon Originals. Just Add Magic, for example, offers all of the qualities that great middle grade and young adult literature have long possessed: They’re geared toward younger ages but are just as entertaining and relevant for adults. 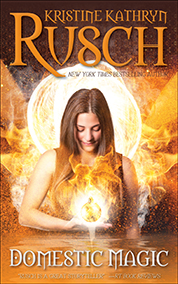 Kind of like the excellent YA offerings we have here at WMG. In fact, every time I watch Just Add Magic, I think of one of Kristine Kathryn Rusch’s YA short stories: “Domestic Magic.”

At a high school for the magical, the most picked-on kid dreams about J. Rutherford Wisenhaur II killing people with a fire spell. She knows her nightmares portend the future, but her domestic magic lacks the power to do most difficult spells.

To make matters worse, no one will believe her. So, what’s a young, nearly powerless witch to do?

So, if you’re looking for a diversion from reality this week, check it out. You can buy it here.

In the meantime, I’ve just figured out the next thing for my family to read together.