Publisher’s Note: A Shining Star of a Series

I’ve been spending a lot of time in a distant galaxy lately, which is cool because I’ve always wanted to travel in space.

It’s even cooler, because it was created by the incomparable mind of Dean Wesley Smith. Fortunately, given my busy schedule, I didn’t have to leave my desk to get there.

You see, sometimes, months or years after we’ve released books in a series, we need to go back and tie them together in a way we couldn’t have before they were written. We don’t always know—because the author doesn’t always know, especially when he or she writes into the dark—that we’re publishing a trilogy, for example. Heck, sometimes we don’t even know it’s a series until later.

And sometimes, we’re just waiting to see where it goes.

Dean’s Seeders Universe is one such series. The universe is so vast, that with each new book, we look at the series as a whole to see where it fits. Sometimes, it’s obvious. Sometimes not.

But books four through eight in the series marked a very clear direction. The first three are a trilogy: Star Mist, Star Rain and Star Fall. And the latest, Starburst, expands the universe even further. 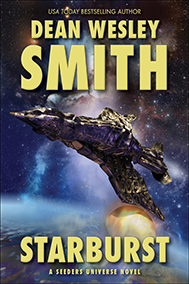 So, we’re in the process of bundling the trilogy together (watch for that to release later this month). And I’m pleased to announce the publication of Dean’s latest Seeders Universe novel: Starburst.

Exploring the vastness of space: The mission of the massive Starburst ships.
Chairmen Cole and Echo of the Starburst ship Star Trail get wrapped up in finding lost ancient cultures.
And in the process find far more than they ever could imagine.
Starburst takes the vast Seeders Universe and expands it yet again beyond where humans dare go.

So, if you’re looking to get the hell out of Dodge, why not join me across the universe?