Publisher’s Note: A Blast from the Past

It was an important year in US history, too. The Cold War ended. The first Gulf War began. We watched a videotape of LAPD officers beating Rodney King, and police brutality became a national discussion topic.

And in the publishing industry, a publication called Pulphouse: A Fiction Magazine, edited by Dean Wesley Smith, was launched.

Now, 26 years later, I’ve found myself reconnecting with classmates I haven’t talked to since high school and college. Topics such as the Cold War, the Gulf War, and police brutality continue to make the news. And Pulphouse Fiction Magazine will soon return to print. 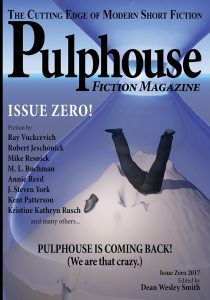 And although time changes all things, many aspects of Pulphouse will remain. Dean remains editor, so the tone of the magazine will remain very similar to its original incarnation. And Kristine Kathryn Rusch, who edited Pulphouse: The Hardback Magazine, is tied to this new project, too.

We’ve been working on this for a while, and I’m thrilled to add this magazine—a three-time Hugo Award finalist—to our product line.

The first release will be a limited edition Issue Zero, which will be available only via Kickstarter later this year. So, stay tuned.

And if you read this blog regularly, you might remember me mentioning I was surrounded by some amazing authors and editors a couple of weeks ago. Well, while other WMG editors bought stories for seven new volumes of Fiction River, Dean bought stories for five issues of Pulphouse.

See, I told you it was exhausting and exhilarating around here. My brain is still recovering, but I couldn’t wait any longer to tell you about Pulphouse. You can read more about the history and future of Pulphouse in Dean’s blog here.

And really, you should.