I have never served in a military capacity, so I can only imagine the courage and sacrifice required to do so. It is a quality I admire in many of those I love, including my father, my stepfather, and my partner, John. Both of my dads served in a time of war: my stepfather in the Navy during the Korean War and my father as a forward observer in the Marines during the Vietnam War.

The closest I have come to participating in a military operation is as a reporter monitoring the news wire for word that the second Gulf War had begun and relaying live reports of the carnage.

Even that, at a distance of thousands of miles and safely ensconced behind a computer screen, left its scars. All I will say of that is this: The US media filters your news. A lot. As to whether this is a good or a bad thing: I’m still undecided. Seeing the raw, unfiltered effects of war—even in narrative form—changes you irrevocably. But one thing is absolute: War impacts everyone—especially those who manage to survive it.

If you’ve ever visited a war memorial with a veteran of that war, you have probably seen this up close.

As a teenager, I visited the Vietnam Veterans Memorial in Washington, D.C., with my dad. At the time, I did not know much about his experiences in combat. I still don’t, really. I did not know then what a forward observer was or the horrible burden they bore. I knew he’d lost partial hearing in one ear when a shell exploded near him, but I hadn’t really understood just what that meant. I was young, naïve, ignorant.

And yet, I remember the haunting look in his eyes as he read the names on the wall. Names he knew. It was at that moment that I understood not all scars are physical.

My father is not the same person he was before becoming a Marine. How could he be? Experiencing trauma like that destroys the person you were before. Some people, like my dad, are reborn like the phoenix. Never the same, but able to create a new life. Others, however, never find a way to rise from the ashes. The price of war is high, indeed. 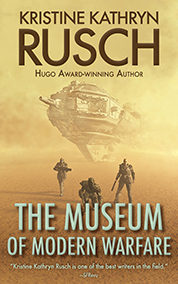 And memorials help us remember those who paid the ultimate price in service to our country.

So, on this Memorial Day, I encourage you to read “The Museum of Modern Warfare” by Kristine Kathryn Rusch. This powerful story offers a different perspective on the concept of a war memorial, and reminds us that there are no winners in war, merely prevailing sides.

This award-winning story is free on her website for the next week.

But it will remain with you for much longer than that.