Publisher’s Note: Prepping for the Apoceclipse

I’m posting this blog early because of the impeding Apoceclipse, as we’re calling it here on the Central Oregon Coast.

No, we don’t think the world will end because of a total solar eclipse. (Although if you want to read an interesting article about eclipse superstitions, click here.) But we are preparing for this eclipse as if it were a natural disaster.

Why? Because the small coastal town in which WMG calls home is directly in the path of complete totality for the Great American Eclipse. Our permanent resident population is about 8,700 people. And although we are a tourist town, which swells our population greatly during peak season (aka summer), the number of people estimated to descend on Lincoln City for the eclipse is in the tens of thousands. Traffic is expected to come to a complete halt, making travel by foot the only option.

And we’re pretty well guaranteed to have no internet or phone service for a couple of days at least.

So, I’m stocking up on food and water and getting ready to take a break from modern society.

If you need to reach us here in the next few days, well, we’ll do our best.

In the meantime, why not read about actual apocalyptic events in Fiction River: Visions of the Apocalypse. 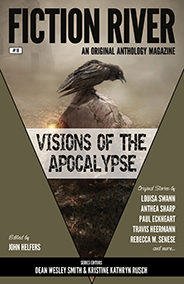 If you missed this one, here’s the synopsis:

The end of the world might come in many forms: ecological disaster, alien invasion, cosmic chaos…the possibilities for destruction seem endless. So, how will those facing the end of the world deal with impending doom? The fourteen talented authors of Fiction River’s latest volume explore just that. From an intrepid adventurer fleeing a world-destroying terror to a man who discovers the most savage destroyers of civilization are closer than he thought, to a chilling tale of our whole planet hurled into the icy black reaches of space, these gripping stories demonstrate why Astro Guyz calls Fiction River “a wonderful, mind-expanding read.”

Table of Contents
“String of Pearls” by Eric Kent Edstrom
“The Shoes I Wore This Morning” by J. Daniel Sawyer
“The Dust Devil, the Riffraff, and the Big Orange Sunset” by Valerie Brook
“Goin’ to the Chapel” by Rebecca M. Senese
“With Wings the End” by Rob Vagle
“Cogs in the Machine” by Paul Eckheart
“The Faerie Invasion” by Anthea Sharp
“Demon-touched” by Travis Heermann
“Same Time Next Year” by M. E. Owen
“The Story That Has to Be Written” by Louisa Swann
“Tyrph Rights” by David Stier
“Paradox. Lost.” by Stefon Mears
“The Night of Brahma” by Leigh Saunders
“Three Degrees Above Zero” by Doug Dandridge

And for those of you ready to experience the eclipse, please remember your safety eyewear. Because losing your ability to read would be its own natural disaster.