The Game of Life (and Work)

After the turbulence of the past few years, I’ve decided that 2018 will be, if nothing else, the year of organization. That is a broad category that can apply to many things, but for the purposes of this blog, I’m going to focus on the concept of organization by means of providing structure to my schedule…particularly as it relates to time spent with my daughter.

This late fall/early winter has been a watershed period for my little family. The relationship between Nola and John has solidified into that of true father-daughter, and watching the positive impact on Nola has made all the hard choices I’ve had to make since she was born worth it. There’s a lot more behind that statement, but it would take a book to explain it all.

One of the many positive aspects of this new bonding, though, is that Nola wants more “family” time as opposed to “just Mommy” time. As such, we’ve instituted game night.

One of the first games we started playing was Clue. John and I both loved this game as kids and Nola thinks it’s great fun now. (It’s so cute how she will purposely show us any character card that represents the character we’re playing at the time to make sure everyone knows we’d never hurt anybody.)

They’ve changed Clue up a bit since the old days (Mrs. White is out and Dr. Orchid is in)—changing a bit with the times, I suppose. Read more about that here.

I can certainly relate with changing up a classic to more accurately reflect the times. Because we’ve just done that here at WMG to launch a new series of workshops—the Pop-Up Weekender Workshops—which are bringing back a very popular workshop of old—The Game—but with a new twist. 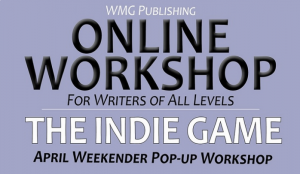 I experienced The Game (led by Dean Wesley Smith and Kristine Kathryn Rusch) in a workshop long before I took the helm of WMG. Back then, of course, it focused on how to make a living at traditional publishing. I remember how much fun it was. Like a game of Life mixed with real-world Dungeons & Dragons—but for authors.

Kris and Dean stopped offering The Game years ago, but I never stopped thinking about how awesome that concept was. So, when we were brainstorming new workshop concepts, I said to Dean and Kris: “I really wish there was a way we could bring back The Game.” Well, the timing must have been right, because Dean and Kris figured out a way to do it, but this time as The Indie Game, in which you role-play your way through ten years of decisions as an indie author.

That’s just one of the Weekender Workshops being offered (the first version of The Indie Game appears in April), with new topics popping up each month, starting in February.

The cost of these workshops is $225 and space is very limited, so don’t roll the dice that they’ll have room if you wait.

As for me, I’ve got a murder suspect to figure out.