Last week, my phone started to ping about 7:30 p.m. on Thursday with concerned messages from John’s family. We had been under a high surf that day and some of the beachfront properties, including a well-known restaurant right on the D River Wayside and a couple of hotels, had some significant damage. The restaurant was evacuated because of a broken gas line. It was enough damage to make at least the regional news cycle, hence the calls.

I hadn’t thought that much about the storm, to be honest. We’re no stranger to big storms here on the Oregon Coast, and this one was more of an ocean event (think beach logs washed into buildings instead of trees falling on them). I’m above the tsunami line, so, while I worry about my beachfront neighbors, I don’t really worry about high surf.

But I know how worrying news stories about events happening near loved ones (but far from the worrier) can be. So, I preemptively texted my mom, dad, and sister (who live on the East Coast) to let them know I was safe and in no harm.

My text, however, had the opposite effect. Mind you, it was 10:30 or so East Coast time. My dad called first, then my mom, and finally my sister. Ah, the best laid plans.

The problem, you see, is that this ocean is scary. People die here…all the time. It’s beautiful, but it needs to be respected. I know that. Many tourists don’t. And it’s nothing like the oceans on the East Coast.

Once I’d calmed my family down, I opened my laptop to do some work and realized that Kristine Kathryn Rusch’s free fiction story for this week couldn’t have been more ironically timed.

The story, which is part of Kris’ Whale Rock series of short stories, is called “Strange Creatures.” 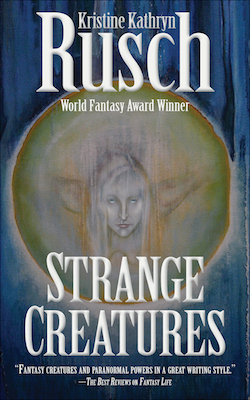 When the storm of the century hits Whale Rock, Sheriff Dan Retsler does everything he can to prevent hundreds of deaths. Everything except the thing that could have prevented the storm in the first place. He should have listened to the beautiful woman who came to his office before the storm hit.

He should have believed in her magic. But he didn’t. And now he must face himself—and the horrible results of a storm he could have prevented.

So, if you want to read a free fantasy story about a huge storm (while we clean up from our most recent one), click here. But don’t wait. Just as a storm tends to blow through relatively quickly, this story is free for one week only.