I’ve been talking to my sister a lot lately about being strong women in our 40s. She and I have been through a lot the past few years that have sparked this conversation. I’m a bit ahead of her, as I should be because I’m the oldest. But we both marvel at the changes in ourselves.

Mentally, we’re in the best place we’ve ever been. We know who we are, and we won’t accept what isn’t true to that. As a result, my sister and I are having frank, open conversations for the first time in our lives.

We fought like cats and dogs as kids. We never hated each other, per se, but we certainly didn’t enjoy spending time with each other. As we matured into adults, we became closer, but there was still a gulf created by the pain and misunderstandings of our childhood. We walked on eggshells, forever afraid of offending each other.

But now, well, those days are long gone. There is nothing, and I mean nothing, we can’t and don’t talk about. We lean on each other for advice and support. We share the craziness of raising our kids. The challenges and joys of our marriages. How different we are now.

And how (who knew?) we are so very much alike.

Her life is in transition, just like mine has been the past couple of years. And I know that although it’s tough now, she’ll be so much happier in a couple of years. She’ll have let go of the baggage of our youth and embraced her power and her potential.

My only regret is that we live on opposite coasts so I can’t be there in person to help her through it and witness first-hand the amazing woman she is becoming. Thank goodness for modern technology.

And thank goodness I’m surrounded by other strong women, both real and fictional.

Speaking of, the latest book by one such real woman—Kristine Kathryn Rusch—is now available for preorder on Amazon (it was already available on Kobo and some other retailers). Searching for the Fleet is part of Kris’ Diving Series, which is known for its strong female characters. 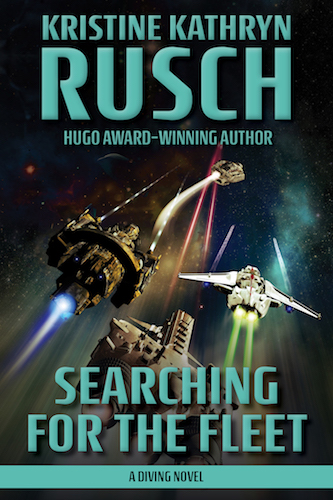 Leaving Boss behind to continue diving the Boneyard, Ivoire Engineer Yash Zarlengo returns to the Lost Souls Corporation’s headquarters to analyze the data from the runabout they discovered there.

Convinced that the experience in the Boneyard proves the Fleet still exists, Yash buries herself in her work, interested in little else.

Ivoire Captain Jonathan “Coop” Cooper notices Yash’s growing obsession with finding the Fleet and joins her in her search.

For the first time in six years, the crew of the Ivoire feels real hope. Coop and Yash know all too well the dangers hope can pose. But this time their hope might just lead them somewhere no one expected.

So if you’re feeling empowered, grab this latest novel now so you can start reading the moment it’s released, which is Sept. 18, 2018. You can find more information here.