Something to Cheer For

I was talking to a friend the other day about watching the World Cup. My husband and I are watching as many games as we can and following the progression to the Round of 16 (and will continue along into the quarterfinals this week).

If you had asked during the last World Cup if I was a sports fan (for you non-soccer folks, the World Cup is played every four years), I would have said no (or even hell-no, depending on the sport).

Soccer (football to most of you) was one of those hell, no sports. I didn’t grow up watching it or playing it, so I didn’t have the base of knowledge I had for baseball and football (the US kind).

Add to this my acquired distaste of all sports, and the last thing I’d have done was flip on a World Cup match.

So when I mentioned watching the World Cup to my friend, she mentioned how she was still getting used to me being a sports fan.

And in that moment I realized that my distaste of sports had never been about the sports themselves, it was about the interpersonal relationships I was experiencing.

I loved watching sports as a kid. My dad played on the company softball team, and we’d be out every weekend cheering him on. He watched football and baseball at home, but not religiously, and I grew up cheering on the Yankees and Giants.

As a teenager, after my parents divorced and my mom remarried, I spent less time with my dad and more time with my stepfather. He was all sports, all the time. If there was a game on the TV, that was what we were watching, and we’d better be quiet. It wasn’t something we did together, really. It was a strong reminder of what I’d lost. And I learned to resent those sports.

When my ex-husband turned out to be the same kind of domineering sports fan my stepfather was, my resentment grew to loathing. It got so bad that the sound of sneakers on a basketball court were like fingernails on a chalkboard.

So imagine my dilemma when, two years ago, my now-husband invited me to attend the Pac-12 college basketball championships in Las Vegas. We had known each other for many years but only very recently started dating. Vegas sounded fun, but the basketball thing had me worried. How could I tolerate even one game, let alone a whole schedule of them? But I had a feeling about this guy, and he made everything else we did fun, so I decided to chance it.

We had a blast, and a whole new world of sports appreciation opened up for me. Because John doesn’t force me to watch sports because it’s some sort of patriarchal right. He includes me in his viewing experience. He helps me understand what’s going on in the sports he has more experience with than I. And sometimes, he proposes we learn a new sport together.

Which is how we’ve come to watch the World Cup this year.

As for who we’re rooting for? That one was easy, but I’ll leave you to guess which one it is.

And if you’d rather read about sports than watch them, check out Dean Wesley Smith’s nonfiction book “The First Tee Panic: And Other Very Real Golf Stories.” 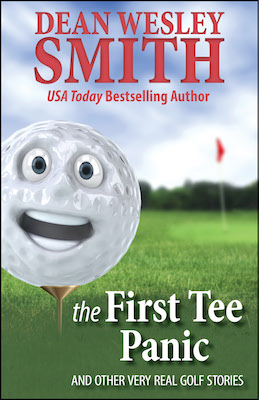 Former PGA Golf Professional and USA Today bestselling author Dean Wesley Smith walks you step-by-step, club-by-club from your car to the first tee and beyond in a laugh-out-loud style that not only teaches, but entertains. Any golfer recognizes the fears, the patterns, the downright horrors of the first shot of a round. Ever topped that first shot just off the front edge of the tee box? Or worse yet, whiffed it completely? Come on, admit it. It happened. Remember? The problems with that first shot don’t start with the swing. Nope, the problems start in the parking lot. And this book will get you flawlessly from the parking lot, through the clubhouse, onto the driving range, over the putting green, and finally successfully off the first tee with a smile.

You can buy the book here.