Dia de los Muertos. Calan Gaeaf. Halloween. Samhain. Diwali…The names themselves sound like a magic incantation, a calling from one world into the next. These are all fall festivals that have roots reaching into the distant past where myth and memory mingle.

I love this time of year. And it’s mostly because of those ancient human feelings that we still have: fear of the dark and a need for reassurance when the nights get long and the cold creeps into our bones. But we also still harbor a fascination with the unknown. What is out there in the dark? And who?

These days we entertain ourselves with scary symbols and images during this season, ghosts and skeletons and eerily carved pumpkins, almost as a reminder of the wonder and fear that originated so long ago. But last year, during the total solar eclipse here in Lincoln City, Oregon, when the moon covered the sun and the day turned to night as though someone flipped the off switch, I had the kind of overpowering sense that I imagine our ancient ancestors must have had when darkness conquered the light. It’s a feeling that bypasses the intellect and goes straight to the soul, a sense of astonishment, of the power of the natural world, and an instant certainty of my own feebleness and insignificance. It was both uncanny and absolutely thrilling. I was agog.

No wonder we conjure spirits to guide us through these encounters with the great mysteries of the universe and our place in it. If there’s one thing we at WMG can provide you with, it’s informative and entertaining guides through the liminal worlds of Halloween, Samhain, Dia de los Muertos and the rest. Kristine Kathryn Rusch and Dean Wesley Smith seem to feel right at home there. Dean has created ghosts who fall in love and spend the afterlife helping the rest of us in the Ghost of a Chance series, as well as dozens of creepy stories with weird characters who inhabit that most liminal of suburban neighborhoods, Bryant Street.

It’s hard to know where to start with all the weird and wonderful characters Kris has created: her books are chockablock with ghosts, mermaids, wizards, and familiars.

Hands down my personal favorite is Ruby. 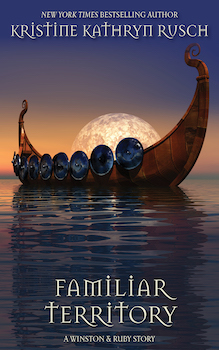 When she first appears in “Familiar Territory,” she is still a little kitten who intends to become the familiar of a wizard named Winston. He is a kind and humble wizard, with small magic powers. Ruby herself is tiny, soft, black and there is nothing humble about her. Her body is small and her mouth is big. And the adventures she and Winston tackle together are matters of life and death.

Just for you, we have made the Ghost of a Chance Starter Bundle, three novels in one ebook, available. Ruby is also yours for the taking by way of Familiarity: A Winston and Ruby Collection. And we’re tossing into the mix a classic volume of Fiction River—Haunted, which is bursting with ghosts. You can get all three for $2.99 each, but only this week.

Take your pick of guides and enjoy this festive time as we slide into the darkness.