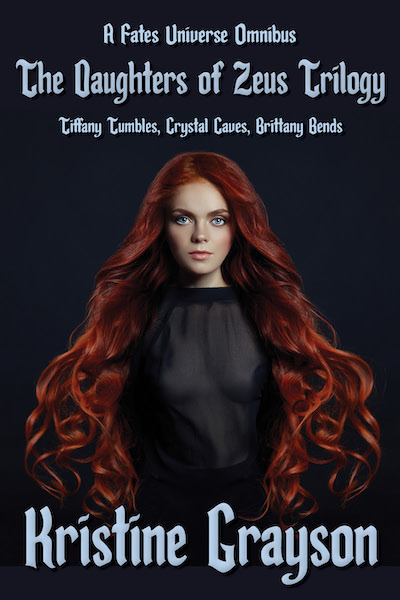 The Daughters of Zeus Trilogy:
A Fates Universe Omnibus

When Zeus tried to use his teenage daughters Tiffany, Crystal, and Brittany to destroy true love, they rebelled. So, he stripped them of their magic. Now they live with their mothers in “the real world.”

But magic cuts both ways; it can provide enormous power to any mage who knows how and when to use it, and it can backfire when used without the guidance of wisdom. This trio of Olympian offspring decide to take the on “real world” and reclaim their magic, one way or another.

Recently fired from her job as an Interim Fate, one of the most powerful people in the world, Tiffany VanDerHoven must move in with her mother in Eugene, Oregon. Tiffany finds living without magic hard enough, but high school? Not even movies or TV prepared her for that.

Tiffany has tumbled into “the real world,” and it baffles her.

Tiffany needs to face her future, but first she must decide what kind of future she wants. One with her crazy magical Greek God family? One in the “real world”? Or can she discover the strength to straddle both worlds?

“This is a completely new aspect of Greek Mythology. It’s light hearted and fast moving and quite amusing. … The author cleverly weaves the myths, the unhappiness and fitting into a normal teenage life with great expertise.”
—Long and Short Reviews

Crystal’s mother calls her “The Unexpected Consequence of a Momentary Lapse of Judgment.” Her half-brothers call her “The Unwelcome Visitor” because they didn’t even know she existed until a few months before. Her stepfather doesn’t even speak to her.

“The second Interim Fates is an outstanding serious teen contemporary…The storyline focuses once again on an outsider who fails to fit in after her fall from the top of the Pantheon to the bottom of an American high school, but Crystal has no loving support system unlike Tiffany. Crystal Caves is summed up in the immortal words of Yogi Bear: ‘…smarter than the average bear’ but still don’t belong here (or anywhere).”
—Midwest Book Review

Brittany misses her sisters—and her magic. After being fired from her job as Interim Fate, Brittany finds herself living with her mom and stepfather in someplace called Superior, Wisconsin. Oh, and her eight half- and step-siblings live there, too.