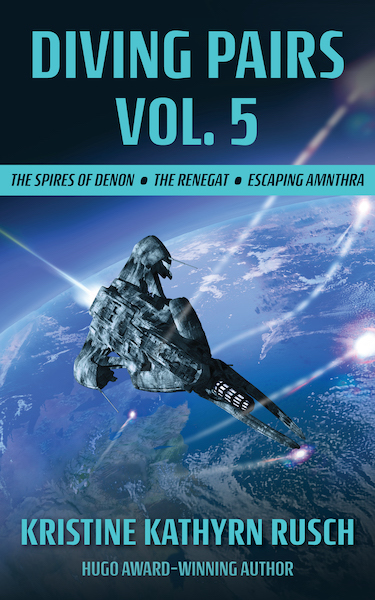 WMG Publishing presents the thrilling adventures of The Spires of Denon, The Renegat and Escaping Amnthra in one epic pairing.

The Spires of Denon

Kristine Kathryn Rusch’s novel Diving Into The Wreck spawned a universe so vast that one novel can’t contain it.  The Spires of Denon doesn’t involve Boss or her crew.  Instead, this powerful short novel follows Meklos Verr, hired to guard an archeological dig near the mysterious Spires of Denon.  There Verr encounters the prickly Gabrielle Reese who heads the dig, and he meets some cave divers who aren’t quite what they seem.  Verr knows that someone wants to harm the dig, but he isn’t sure if the attack will come from outside the tall mountain range or from the group of archeologists within.  Verr must figure out the threat before it destroys him, his crew, and the beautiful Spires of Denon.

As a young recruit, brilliant engineer Nadim Crowe accidentally destroys an entire Scrapheap full of ships. Now, decades later, he ends up on the crew of the Renegat, the only ship in the Fleet ever sent on a mission backwards to investigate an ancient Scrapheap.

Something invaded that Scrapheap and the Fleet wants to know what. Or who.

The Renegat: The only ship the Fleet dares risk. The Renegat: A ship of misfits and screw-ups sent on an impossible mission. All alone in deep space.

When the captain and senior crew abandon the Renegat, linguist Raina Serpell assumes command. She needs to get the ship and remaining crew home.

As the ship comes under attack from the planet below, Raina must first figure out how to operate the ship’s firepower. Harder still, she must battle her own past to become captain in more than just name alone.

A gripping, fast-paced read. Award-winning Kristine Kathryn Rusch working at the top of her form.

“… a story of exploration of an artifact on an alien world, a bit reminiscent of the sort of story that Jack McDevitt writes.”
—Eyrie.org

“…Denon is literally luminescent in its depiction.”
—Suite101.com