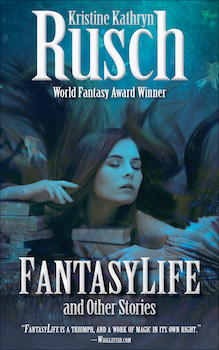 
Get the ebook!
Get the trade paperback!

When Lyssa Buckingham left her hometown of Anchor Bay, Oregon, she never planned to return. She thought she could escape her family’s legacy. She thought wrong.

To help Lyssa’s daughter, 10-year-old Emily, Lyssa must rejoin her family and come to terms with its magical heritage. Now Lyssa fears she and Emily might pay the greatest price of them all.

To quell the coming storm and save the lives of everyone in Seavy County, Lyssa must uncover the truth about her family’s past—even if it changes her daughter’s future forever.

FantasyLife and Other Stories pierces the thin veil between the magical world and the human one to reveal the darkness and sacrifice that holds them together. Also includes a special introduction by the author, as well as the Seavy County stories “The Women of Whale Rock,” “Strange Creatures,” and “The Light in Whale Cove.”

“FantasyLife is a triumph, and a work of magic in its own right.”
—Wigglefish.com