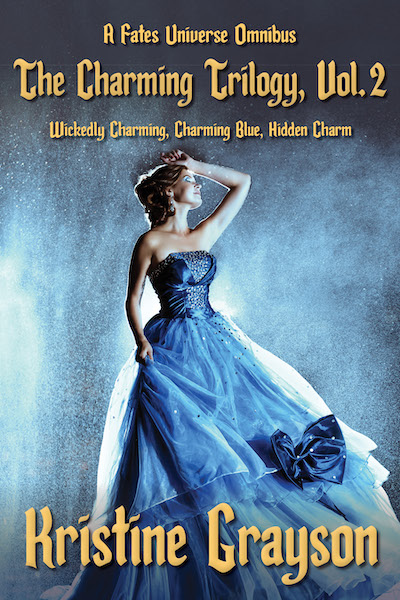 “The reigning queen of paranormal romance.”
—The Best Reviews

Romance springs up in the unlikeliest places in this lively trilogy. Like the fractious fairy tales of The Charming Trilogy Vol. 1, these tales turn charming princes, wicked stepmothers, even Bluebeard himself, on their heads, all on the way to the elusive happy endings that last forever.

Wickedly Charming
When Cinderella’s Prince Charming finds himself divorced, bitter, and the new owner of a bookstore, his world unexpectedly takes a turn when Mellie, a supposedly “wicked” stepmother, shows up. Fantasies and fairy tales come true, but not always the way we think.

Praise for Wickedly Charming
“Wickedly Charming may be the most aptly named romance of the year…Perfect for those who like just a hint of fantasy in a sweet romance.” —Booklist starred review

Charming Blue
Romance, fantasy, and mystery run rampant through this tale of broken dreams and the dead end of a bottle of booze. A superbly handsome and charming prince, Bluebeard labors under his bad reputation with women, which leaves him open to accusations of mortal crimes as well as magical ones. When Jodi, a fairy tale refugee and magical “Fixer” of problems among the magical folk of Hollywood, gets recruited to “fix” Bluebeard’s image, she finds herself falling under his spell.

Praise for Charming Blue
“A beguiling mystery is matched in power by the palpable and forbidden attraction between Jodi and Blue, making this one of the best series installments to date.”
—Publisher’s Weekly

“If there’s one word that sums up this book, it’s originality.”
—Long and Short Reviews

Hidden Charm
When a Charming Prince named Sonny rescues Rapunzel from her tower prison, she rides off with him and gets on with her life—her real life in the Greater World. They set up a home in Los Angeles, and she begins to discover the strength of her magic.

But when Sonny disappears, Rapunzel needs help finding him.

Enter Henry, the Frog Prince, who works the front desk of the Archetype Place. Only Henry can help Rapunzel find her husband because of the vast power it took to conquer Sonny. But Henry wants nothing to do with Rapunzel or her problem. He fights enough of his own.

A typically fun Grayson romp through the world of magic and love.