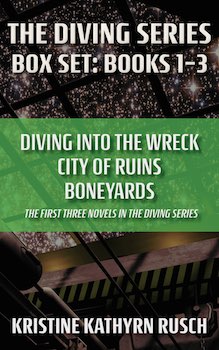 This starter bundle includes the first three books in the series: Diving into the Wreck, City of Ruins and Boneyards.

Diving into the Wreck

City of Ruins (Winner of the Endeavor Award)

Years after stumbling across her first Dignity Vessel, Boss now leads a team of people searching for “loose” stealth technology. She takes a team to Vaycehn to investigate a phenomenon called death holes, thinking they might lead her to stealth tech.

Captain Jonathon “Coop” Cooper and the crew of the Ivoire finally find a way out of foldspace despite their damaged anacapa drive. But he soon realizes the ship’s return to normal space is anything but normal.

Coop and Boss hold the answer to questions both seek. But what they discover will change everything.