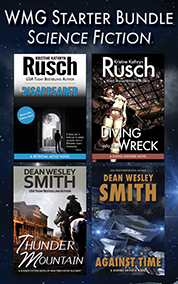 Find your next science fiction adventure from WMG Publishing in this four-book bundle containing the first book in some of the best sf series being written today.

Meet Miles Flint—called one of “the top ten greatest science fiction detectives of all time” by io9—from Hugo Award-winning Kristine Kathryn Rusch’s Retrieval Artist series. Gear up for page-turning space adventure in Rusch’s Diving series. Get ready to travel in time to the Old West with USA Today bestselling author Dean Wesley Smith’s Thunder Mountain series. And prepare to unravel the mysteries of the human race in Smith’s Seeders Universe.

This starter bundle includes: The Disappeared, Diving into the Wreck, Thunder Mountain, and Against Time.

This Endeavor Award-winning novel is Flint’s first adventure, the story that turns him from a police detective in the Armstrong Dome on the Moon into a Retrieval Artist.

Diving into the Wreck

Offered a free trip into a remote Idaho wilderness that she loves and studies, Professor Dawn Edwards can’t refuse. On the trip she meets Professor Madison Rogers, and they fall for each other before they even reach their destination.

But living in the Old West proves to be a brutal task. Somehow, Dawn must survive to rescue herself, her friends, and the man she loves.

A science fiction novel of new times in the Old West.

Paleontologist Callie Sheridan spent a few days deep in the Oregon Caves on a dig with three students from the University of Oregon. When they emerged, they found almost everyone in the world dead. Survival became her only thought.

Mathematician and galactic explorer Vardis Fisher dropped into orbit over a planet where almost all of the human life had been recently killed for no obvious reason. Suddenly, hundreds of other ships, all human, appear in orbit and start working to save the planet’s remaining population.