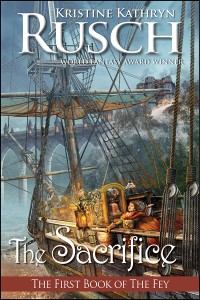 We are excited to announce the release of a Paperback edition of The Sacrifice, the first novel in the epic Fey Series.

The Fey, known for their beauty and their warrior magic, have set their sights on Blue Isle. They should conquer the Isle quickly; its people, simple and religious, have never known war.

On the eve of the invasion, Jewel, the granddaughter of the Fey’s all-powerful Black King, has a frightening vision, one that ties her fate to the Isle forever. Still, she helps her father Rugar head the invasion force.

The force meets a surprising resistance. Nicholas, heir to Blue Isle’s throne, has always dreamed of battle. Normally, he would be no match for the powerful Fey. But Blue Isle has a secret weapon—a weapon no one understands, a weapon that could stop the Fey in their tracks.

A fast-paced, vibrant novel, filled with memorable characters, Sacrifice begins a saga that will take readers to a richly imagined world, filled with magic, treachery, and unexpected love.