You never know who you’re going to meet. For example, I never would have thought I’d meet the Dalai Lama’s Oracle, let alone share a meal with him. I especially didn’t expect to meet such an iconic and influential figure in a small town on the Oregon Coast. But I did just that a few years back.

It was during my time running the local paper, and I worked frequently with one of the area ministers on news stories (the church was very active in the community and hosted a number of events). Her husband, as it turns out, was a Buddhist and was very active in his support for the Dalai Lama. So, when the Oracle planned a visit to the States, Lincoln City was one of his stops.

I’m not a Buddhist nor am I particularly religious, but when the minister asked if my husband and I would like to join this eventful dinner, I was honored. I have traveled to many parts of the world and dined with people from many different cultures. Despite the Oracle’s job (I don’t quite know what to call it), he was a very down-to-Earth guy. It was an amazing evening that I will never forget.

Not life-altering, mind you. I’m still not Buddhist. But very, very cool.

Sometimes, however, those chance meetings are life-altering. Even life-threatening. I’m talking about the kind of run-in where the other person (or group of people) isn’t interested in polite conversation. They might even wish you harm.

Which brings me to a fictional meeting-by-chance. And the next book in Kristine Kathryn Rusch’s Anniversary Day Saga.

Our final book before the Saga grand finale (Masterminds), Starbase Human opens with an event those of you who subscribe to Fiction River might remember: An event originally published in a slightly different form as “Sole Survivor” in Pulse Pounders. That story was a perfect fit for Pulse Pounders, because it sucks you in immediately and doesn’t let go for pages. That Kris sure knows how to keep your heart racing. But then, y’all knew that already, didn’t you?

Starbase Human is the final Retrieval Artist Universe novel in this saga and gives crucial added details to the masterminds’ plan. Here’s the synopsis: 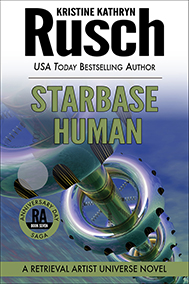 Can the fate of a forgotten starbase hold the key to the Moon’s survival?

Long before the Anniversary Day bombings brought the Moon to its knees, a far-flung starbase became the testing ground for a diabolical plan: the annihilation of every human inhabitant by an army of clones.

Every lead to the masterminds behind the bombings uncovered by criminal kingpin Luc Deshin dead ended in an Earth Alliance connection.

And Frontier Marshall Judita Gomez puts her own life and the lives of her team on the line when her search for the origins of the Anniversary Day assassins leads to an Earth Alliance cloning factory.

From the quiet courage of a Disappeared who struggles to decide whether to come out of hiding to the potent fury of a master criminal who puts a plan in motion to strike back at an overwhelming enemy, Starbase Human brings readers one step closer to the exciting conclusion of the Anniversary Day saga.

At this point, do I really need to say more? I didn’t think so. You can pick up your copy of Starbase Human here.