I have some very exciting news to share with you this week. But first, a little alternative history.

Kristine Kathryn Rusch is no stranger to such speculation. She’s also no stranger to being recognized for her achievements in the genre. And I’m pleased to announce that her most recent alternative history novel is no exception.

Because The Enemy Within just received a nomination for the Sidewise Award for best alternative history (long form). 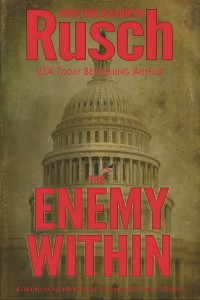 If you haven’t read it, here’s the synopsis:

One of Kristine Kathryn Rusch’s most acclaimed short stories becomes one of her most original novels.

February, 1964: Two men die in a squalid alley in a bad neighborhood. New York Homicide Detective Seamus O’Reilly receives the shock of his life when he looks at the men’s identification: J. Edgar Hoover, the famous, tyrannical director of the FBI, and his number one assistant, Clyde Tolson.

Interestingly, the novella that inspired The Enemy Within, G-Men, won the 2008 Sidewise Award for best short form alternative history.

The 2014 Sidewise Award winners will be announced August 21 at Sasquan, the 2015 Worldcon in Spokane WA.

In the meantime, please join me in wishing Kris congratulations on another Sidewise nomination.