Publisher’s Note: An Issue of Valor

Valor (n): strength of mind or spirit that enables a person to encounter danger with firmness; personal bravery great courage in the face of danger, especially in battle.

Bravery comes in many different forms. From the heroic acts of everyday citizens to the everyday courage shown by those men and women who put their lives on the line to protect and serve.

I have seen that bravery among members of our military firsthand time and again. It often must last long after the military action has ended. For my father, it was surviving the traumatic events of the Vietnam War and the aftermath of being a veteran of that war. For a friend, it was surviving devastating injuries from an IED and somehow facing every day with renewed courage no matter how difficult the journey back to himself.

From wars that spanned a generation came different acts of bravery.

But what bravery and courage will be needed in the future? 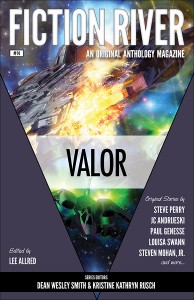 Here’s the synopsis and the table of contents:

This latest volume of Fiction River celebrates the bravery and courage beating within the human heart.

“The Happy Man” by Jamie McNabb

“In the Shadow of Pittsburgh” by Kara Legend

“Beloved of the Electric Valkyrie” by Scott R. Parkin

Valor is on sale now in ebook and print from your favorite e-retailer or book seller. You won’t want to miss this exceptional volume.