Two years and some months ago, Dean Wesley Smith came to me with a crazy idea. He wanted to produce a monthly magazine featuring his own work, and he would write a new novel for that magazine every month. At first, I thought he must be playing me to see how I would react. But very quickly, I realized he was serious. And I was intrigued.

The question at that point was less about whether we’d publish it (I could calculate the numbers very quickly to see that it was a worthwhile project), but could he really do it? I mean, that’s a monumental undertaking, especially because he wanted to do the print layout himself.

Now, let me clarify. My doubts were not about whether Dean could write novels that fast. I knew he could. But he also writes a daily blog and teaches a ton of workshops for WMG and a million other things that take time. The only time Dean is not working is when he’s sleeping, really. So, I was more concerned about him burning out than his ability to meet his goal.

But he was really excited about the project, and who was I to say no? So, in October 2013, we launched Smith’s Monthly. And it’s been going strong ever since.

In fact, I issue #24 will be back from the proofreader soon and into production. That’s right: two years, twenty-four issues. And continuing.

Here’s a sneak peak at what Dean says about the project in his introduction to the 24th issue: 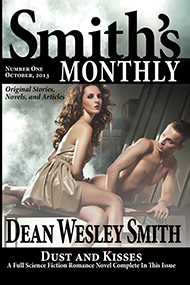 In late October of 2013, the first issue of Smith’s Monthly came out.

Admittedly, this was a crazy idea, to put a full novel, serial novels, some non-fiction, and a bunch of short stories in a magazine issue, all written by me.

And do that every month.

Something like this magazine had never been done in publishing history. Not ever.

It hadn’t even been tried before.

Occasionally, back in the old pulp days, one writer would fill an issue of one magazine or another, often with stories written under pen names.

And a few authors, Lester Dent to name one, wrote a novel a month for years.

But no one had tried filling a monthly magazine before every month.

Yes, I am that crazy.

Not only has Dean produced two years worth of monthly magazines, he’s launched no less than four new novel series because of it, as well as brought back some previously published but no-longer-available books in the form of serials.

I really can’t emphasize how impressive a feat all this is.

As a reminder, you can subscribe to Smith’s Monthly in ebook or trade paperback, and every issue ever published is available from your favorite retailer. They won’t go out of print.

So, please join me in congratulating Dean on this incredible milestone. And if you haven’t already checked out Smith’s Monthly, now is a good time to start.