Tomorrow marks the launch of the final book in Kristine Grayson’s Interim Fates trilogy, Brittany Bends, and I feel as giddy as I did the day I graduated high school. Now if only I had a tasseled cap to throw up in the air…

The Interim Fates trilogy incorporates humor, magic, misunderstandings, and the central theme of finding one’s own identity—the core of the high school experience.

The three books—Tiffany Tumbles, Crystal Caves and Brittany Bends—tell the story of the Interim Fates—Tiffany, Crystal and Brittany—who were first introduced in Grayson’s bestselling Fates Trilogy (Simply Irresistible, Absolutely Captivated, Totally Spellbound). The three teenagers are now mortal and struggling to fit into a world without magic—and without each other. 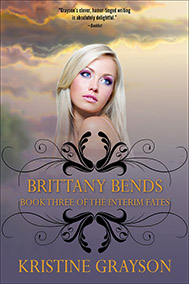 Brittany misses her sisters—and her magic. After being fired from her job as Interim Fate—which she only had because her dad, Zeus (yeah, the Zeus), tried to get rid of true love—Brittany finds herself living with her mom and stepfather in someplace called Superior, Wisconsin. Oh, and her eight half and step siblings live there, too.

I hope you’ve been enjoying this series as much as I have. Kristine Grayson’s writing is truly magical.

And speaking of magical writing, stay tuned till next week, when I’ll have an announcement about her Christmas stories…