Today is President’s Day, which got me thinking about all the stories we have that feature presidents, both actual and fictional. So, if you’re looking for some presidential reading to complete your day, here are a few suggestions: 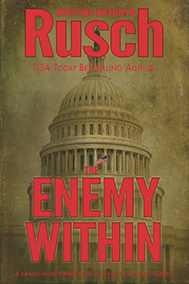 The Enemy Within (Winner of the 2014 Sidewise Award for Best Long Form Alternate History) by Kristine Kathryn Rusch: 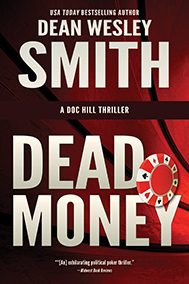 Poker: a high-stakes, deadly serious professional sport. Doc Hill knows all too well the risks involved with the sport. Or so he thinks. But when one of the greatest poker players of all time dies, the stakes rise even higher. Doc must solve an increasingly frightening series of murders—and win the biggest tournament of his career—before he finds himself forced to fold his cards for good.

A fast-paced thriller that delves deep into the enticing world of high-stakes poker, Dead Money raises the risk of the political thriller to create an exciting new genre—political poker thriller.

When Living History Professor Kimber Lawson’s least favorite student brings her a report of Mary Todd Lincoln conducting séances in the White House, Kimber brushes it off. But then more reports come to her attention—of historical figures hearing voices, seeing ghosts and holding séances that had never before been reported—she knows she must investigate. And what she finds might change everything she thought she knew about time travel.

Jaqueline Kennedy Onassis—former first lady, editor, mother, grandmother—lives a life of mystery. But she wants to solve a mystery of her own: who changed the world on November 22, 1963? Oswald? A group of conspirators? Originally written for a mystery anthology titled The First Lady Murders, “Jackie-O” explores the murder at the center of the former first lady’s existence, the murder of her husband, Jack.

From early on, Devin Culhane navigates the political world like a pro. When President Milan handpicks Devin as an intern, he comes to idolize Milan as a sort of demigod. Until Devin finds himself confronted with Milan’s past. Devin’s response to that information will change the course of history—but sometimes change brings consequences too harsh to bear.

Legend has it that Abraham Lincoln scrawled the Gettysburg Address on the back of an envelope as he traveled to the battlefield to dedicate a cemetery. But the legend belies Lincoln’s struggle to carefully choose the right words. Words that must soothe a fractured nation, inspire change and chart the course for the nation’s future. Because his speech in Gettysburg will change history, but not necessarily in the way he hopes.

That should be plenty of reading to keep you busy for the day (or week or what have you). In the meantime, happy Presidents’ Day.