I have to admit, I’m not much of one for marathons. I’ve never been fond of running. Sure, I ran track in high school, but I was a sprinter. And really, sprinting is a life skill. I really only believe in running if something is trying to eat you.

But I know lots of runners. And while I think they’re mildly insane <grin>, I respect their commitment to the sport. 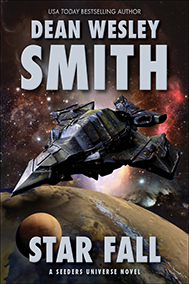 But Dean Wesley Smith has taken the marathon to a new level in his latest Seeders Universe novel, Star Fall. This race spans the entire length of the ship. What’s the big deal, you ask? Well, this ship is as big as the US, and the race is like running from the Oregon Coast to the Jersey Shore and back again.

See what I mean. Now, that’s crazy. Which means it makes for crazy good reading.

Seeders never do anything in a small way, including their sports. Matt and Carey, the chairmen of the Starburst ship Star Fall started a yearly relay race from the very front of their ship to the tail and back again. An extreme relay of over nine thousand kilometers run by ten-member teams.

But before the race could start, a scout ship vanishes inside a shielded galaxy. Who could put a shield around an entire galaxy? And why?

A galaxy-spanning tale of adventure, suspense, and the vast possibilities of space.

If you haven’t checked out the Seeders Universe yet, you should. It’s an incredibly rich world. And couldn’t we all use an escape to a different world right about now?