Publisher’s Note: A Deal to Get Your Heart Pumping

I’ve got some thrilling news to tell you about. Fiction River: Pulse Pounders: Adrenaline releases today. And even better, it’s part of a Storybundle, too.

The incomparable Kevin J. Anderson edited this volume of Fiction River, and like the first volume he did, Pulse Pounders, this one will keep you on the edge of your seat. 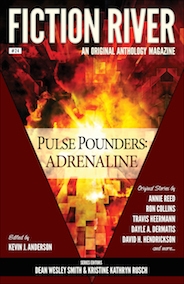 Adrenaline. Ranging from straight thriller to science fiction and fantasy to mainstream crime, these fifteen stories promise to make your pulse pound. Join an ex-president as he tries to escape the mother of all assassination attempts, a heroine on a mission straight from Hell, and a story of war so powerful it will burn into the memory. Strap in and find out why Adventures Fantastic says Fiction River “is one of the best and most exciting publications in the field today.”

Table of Contents
“The Wrong Side of the Tracks” by Kelly Washington
“The Ex” by Michael Kowal
“The Demon from Hell Walks into a Speakeasy” by Ron Collins
“Blood Storm” by Bob Sojka
“So Many Ways to Die” by Dayle A. Dermatis
“Egg Thief” by Debbie Mumford
“Dust to Dust” by Annie Reed
“O’Casey’s War” by Patrick O’Sullivan
“Looting Dirt” by David Stier
“The Mark of Blackfriar Street” by Scott T. Barnes
“Death in the Serengeti” by David H. Hendrickson
“Rude Awakening” by Kevin J. Anderson
“Cleaning up the Neighborhood” by Dæmon Crowe
“Redline” by Travis Heermann
“L.I.V.E.” by Eric Kent Edstrom

As the publication date for this book was approaching asked me if he could Pulse Pounders: Adrenaline in a Storybundle he was curating called The Bump in the Night Thriller Bundle. That sounded like a great idea to me, so I agreed.

Here’s a bit from Kevin on that bundle:

If you’re ready for summer thrills and chills (ones that don’t even require air conditioning), I’m happy to show off the brand new “Bump in the Night Thrillers” StoryBundle, which just launched today. Sixteen suspenseful, fun, and entertaining reads.

For thrilling adventures in other times and places, there’s Death Wind by Travis Heermann and Jim Pinto and Lady Sherlock by Brooks Wachtel. For straight suspense with a high-tech or a darker edge, you’ll enjoy the Daredevils Club novel Artifact written by me, F. Paul Wilson, Matthew J. Costello, and Janet Berliner, and The Demon in Business Class by Anthony Dobranski, Whack Job by Mike Baron, and The Devil’s Churn by Kristine Kathryn Rusch. If you like all kinds of fast-paced fiction, there’s the new anthology Pulse Pounders 2: Adrenaline.

You can click here to read much more about the bundle.

So, what’s this mean for you, dear reader?

Well, if you want to read this new volume of Fiction River, and you’re not a subscriber already, you might want to check out the Storybundle. It’s a heck of a value. (And don’t forget about the SF&F Binge Reader Bundle, which is still available. Click here for more information.)

If you are a subscriber, and you send your receipt from purchasing the Storybundle to subscriptions at wmgpublishingmail dot com, I’ll extend your subscription by one complimentary volume.