We have two fantastic new releases coming up from Kristine Kathryn Rusch, and they’re both available on preorder in ebook. So, if you want to start planning your fall reading (once you finish all those awesome books in the Light in the Dark YA Storybundle I told you about last week, of course), here’s what you need to know. 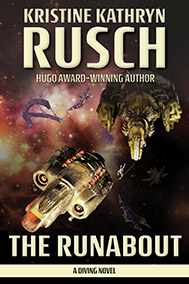 First up is the latest novel in Kris’ Diving series, The Runabout. If you missed it in Asimov’s (the first full novel ever printed by that magazine, btw), or you just want a standalone copy, you’ll want to reserve your copy today.

A graveyard of spaceships, abandoned by the mysterious Fleet thousands of years earlier. Boss calls it “The Boneyard.” She needs the ships inside to expand her work for Lost Souls Corporation. Yash Zarlengo thinks the Boneyard will help her discover if the Fleet still exists.

Boss and Yash, while exploring the Boneyard, discover a small ship with a powerful and dangerous problem: The ship’s active anacapa drive.

To escape the Boneyard, Boss must deal with the drive. Which means she’ll have to dive the ship on limited time and under extremely dangerous conditions. And she can’t go alone.

As avid readers of this blog might remember, I’ve been a fan of the Diving series since before I took the helm of WMG. So, I’ll let you in on some inside information. I have the next Diving book in my hands, too. It will be released sometime next fall, although you’ll get pieces of it in Asimov’s along the way. For more information on the Asimov’s details, go to Kris’ website directly and sign up for her newsletter.

The Runabout releases Sept. 22 in ebook, paperback, and audiobook. But you can preorder it here. 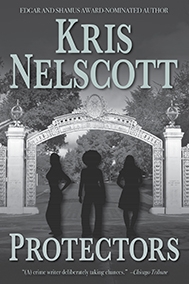 And for you Kris Nelscott fans—that’s Kris’ historical mystery pen name—we have a new release coming up that we’re very excited about.

Protectors features characters Kris has written about before in short stories or, in Val’s case, Stone Cribs. Now, Kris brings them together in 1969 Berkeley.

A former combat nurse, a former legal secretary, and the owner of one of the first women-only gyms form an unlikely alliance in this fast-paced and riveting new work by the acclaimed historical mystery novelist Kris Nelscott.

The novel opens on the day of the Moon landing, July 20, 1969, two years after the Summer of Love changed Berkeley forever, and left lots of broken teenagers in its wake.

One of the first (if not the first) women-only gyms in the nation and the start of the Women’s Self-Defense Movement bring June “Eagle” Eagleton, Valentina “Val” Wilson, and Pamela “Pammy” Griffin together.

They never intended to face the kidnappings and murders of college students. But no one else paid attention.

An amazing trip into the experiences and lives of 1969 Berkeley told with riveting attention to detail. A read that will keep you turning pages into the late night and shock you at the same time.

This book was originally released on preorder as A Gym of Her Own, but we realized that name wasn’t working (for the behind-the-scenes look at why that is, click here to read Kris’ blog post on that topic.)

Protectors will be released Oct. 17 in ebook, paperback, hardcover and limited-edition hardcover. To preorder the ebook, click here.

So, start with the Storybundle, then preorder two amazing, and diverse, books.

What better way to dive into fall!