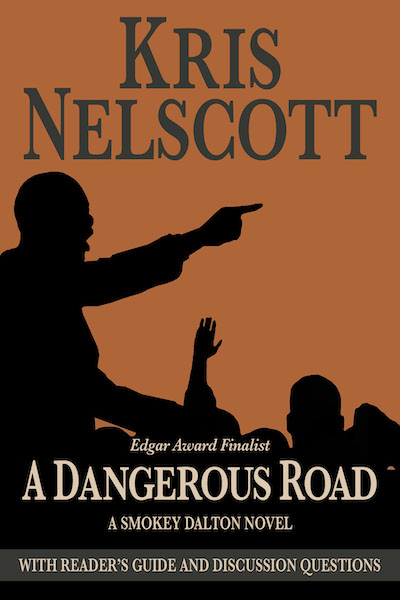 
Get the ebook!
Get the trade paperback

“Kris Nelscott can lay claim to the strongest series of detective novels now being written by an American author.” —Salon

Who is Smokey Dalton?

Private Investigator Smokey Dalton works for Memphis, Tennessee’s black community. He has almost no interaction with the white hierarchy, even though they exist only blocks away. So he’s surprised the day a white woman walks into his Beale Street office. Laura Hathaway has sought him out because he’s a beneficiary in her mother’s will, and Laura wants to know why.

So does Smokey. He’s never heard of the Hathaways, but his search will take him on a journey that will challenge everything he’s ever known, including his own identity.

Set against the backdrop of the strike and protests that will end with Dr. Martin Luther King Jr.’s assassination, A Dangerous Road combines the politics of race, betrayal, unexpected love, and the terrible cost of trust.

It’s a story so memorable the Mystery Writers of America chose it as one of the top five novels of the year and the Historical Mystery Appreciation Society honored it as the winner of the Herodotus Award for Best Historical Mystery.

What the critics say:

“Powerful stuff, with a role for every major black actor in Hollywood.”—Kirkus Reviews

“More than just offering a puzzle, this novel encourages self-examination about identity, responsibility and the consequences of choices. Smokey proves himself a man of conscience able to make tough choices.” —Publishers Weekly

“Nelscott’s series setting, in the turbulent late ’60s, gives her books layers of issues of racism, class, and war, all of which still seem to remain sadly timely today.” —Oregonian

The Smokey Dalton books are “a high-class crime series.” —Booklist

Awards for the series:

The first Smokey Dalton novel, A Dangerous Road, won the Herodotus Award for Best Historical Mystery and was short-listed for the Edgar Award for Best Novel; the second, Smoke-Filled Rooms, was a PNBA Book Award finalist; and the third, Thin Walls, was one of the Chicago Tribune’s best mysteries of the year. Kirkus chose Days of Rage as one of the top ten mysteries of the year and it was also nominated for a Shamus award for the Best Private Eye Hardcover Novel of the Year. Street Justice was nominated for a Shamus award for the Best Original Paperback P.I. Novel.